In more than one way.   Today was prep for the colonoscopy and it's gone better than I remembered from last time so far.  Even managed to spend time with Thomas clearing stuff out of the garage.  We don't have any storage facility yet, but we've shifted some of the more important stuff into the conservatory and some non-important stuff under the covered deck and in the kids play hut.    I did have to take a few breaks and wouldn't have wanted to be away from home, but all in all bearable so far at least.

First thing I'm going to eat tomorrow is one of these: 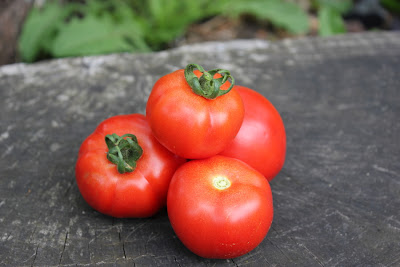 These are our first tomatoes of the season and I'm snaffling two of them!  Then it'll probably be back into the garage; boys will be installed on the Xbox to keep them safe.

At the moment this is what the garage looks like:


Got a phone call from the EQC/Fletchers chap this morning asking me to put in a claim for the December event seeing as it's made the garage worse.   I did that so now have a third claim number and have let him know the number so now it's just a waiting game.   Hope we have time to get storage organised, but that has to wait on the insurance company.   There will be a lot of stuff in the red bin, and we may have to send some to the tip.   Hopefully some will go in the skip when the garage comes down, not sure what their attitude is on that though.

We had help today though, Ray was very interested in what we were doing

It's amazing how much stuff we can accumulate - and you don't really realize it until you have to move it.

Love the tomatoes - I don't like eating them - but I do love growing things!