There are a number of reasons for this including laziness, too much time on the xbox and laziness.  I have been doing other things though.  This includes many appointments at physio, acupuncture, joining a gym, stopping the front door from sticking, weaving, knitting, spinning and sewing.

I'm about to go clean all the window frames since mildew is starting to show on some, this is despite having double glazing and the forced air system in the roof; the downside of no thermal break in the aluminium frame I guess.

On the health front things are improving, the acupuncture is helping, though she wants me to give up gluten for a month which I'm not looking forward to and T is not supportive of at all.  I'm hoping that it might be one of the causes for my palpitations though, since if it is at least that's something I can fix by avoiding it and the fact that I love wheat so much is a pointer that it may well be a problem.

On the crafting front I'm working on a wool coat (not sure why since I rarely wear the one I have, but the fabric was there and needed using so...).  I need to get that finished so I have space in the studio since the loom in there has now been sold and the new owner is in the North Island; there will be movers coming in to shift it out so space would be good.

I've got a project on Maire (the Macomber loom) and I'm really enjoying that, over halfway through the scarf at the moment and the remaining warp will be made into fabric for a soft toy, which toy depends on how much I have. 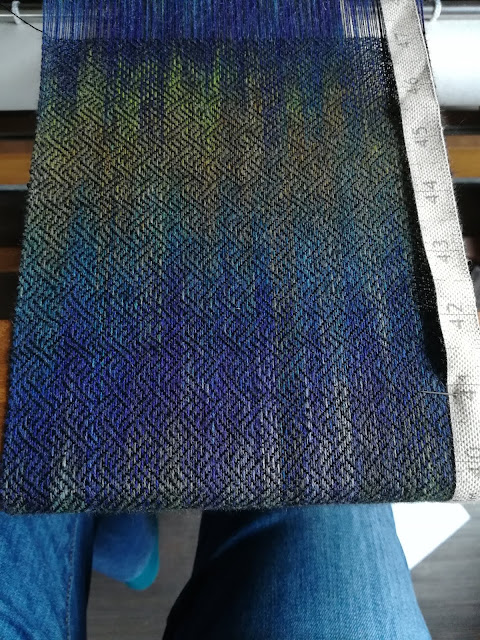 The warp for this is hand-dyed by Agnes Hauptli in merino/possum and I'm using black alpaca for the weft; it's at 28EPI and although it's slow it's so much fun!

Maire will go out to the studio once this project is done and of course once the other loom has been moved on. 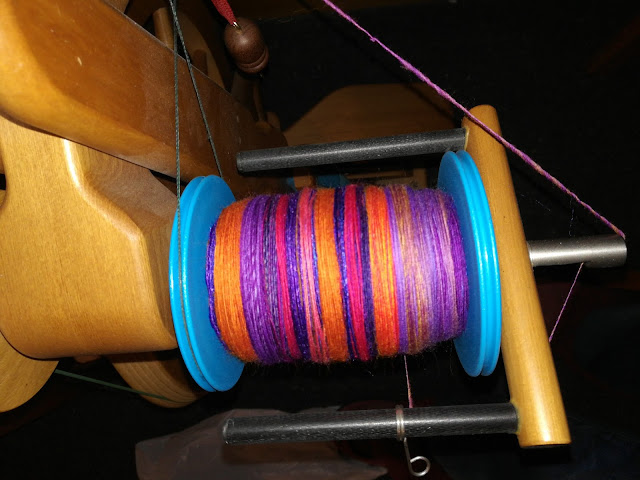 The theme for this one was orange and purple; it's going to be a very vibrant yarn.

On the knitting front I'm working on a boucle cardigan, the yarn for which was bought about 5 years ago for me by Dh and was for me when I was smaller; the gym will help take care of that along with cutting sugar again; fell off the wagon there for a month or so.

That's it for me for the moment, now going to go clean those window frames and get the kids to feed themselves lunch; they're old enough to do that themselves now.
Posted by Rachelle at 11:57 AM 0 comments