Been very busy recently. Got all the Christmas presents sorted and engraved. I actually used DH's Dremel to do the engraving, so it's not quite as pretty as the professionals, but it's not bad for a first-timer! I'll let you know what they all are after Christmas day. Don't want to spoil the surprise for the family.

Speaking of family, there's one less now. Unfortunately my BIL's wife decided to leave him with no warning a few weeks back. Atm he has custody and she gets the boys on a regular basis. We're hoping that he will be able to move back here to Christchurch once everything's sorted, but I don't know how long that will take.

We're having issues of our own, but not marriage issues. Ian is being a right pain to get to sleep at night. We've tried Tart Cherry juice with natural melatonin with no luck, Rescue Remedy Sleep and am now trying a new thing from a Bach flower practitioner. Unfortunately because the boys share rooms it means George is tired during the day and his concentration at school is suffering. I'm trying a different remedy for him.
On a positive note we found the Trip Trap chair worked well for Ian so our occupational therapist is applying for funding for one for him. Now that it's gone back to them we've noticed he's much harder to keep at the table at meal times again. She's pretty sure we'll get funding, but doesn't know how long it'll take. Fingers crossed it'll be soon! Aside from that Ian's vocab is increasing slowly and he's starting to get interested in what I do, helped bake some muffins the other day which was great; well, apart from the small flour and cocoa powder explosion. Didn't take a photo as the SD card in the camera was sick. Got a new one now though.
George is getting really independant, wants to walk to school by himself. Unfortunately we have a dangerous intersection on the way so I'm insisting on walking him to the school gate. He'll just have to live with that.

Vege garden is all planted. We've got 4 zuchinni (courgette) plants, a couple of rows of peas, lettuces, tomatoes, potatoes and corn all doing well. Carrots are thinking about it, went with the purple ones this year instead of the usual orange. George is even taking carrots for lunch at school so I'll have to plant more soon.

Am knitting and spinning still, have a couple of sewing projects ready to start and am dyeing fibre too. Having a ball! I've just finished a couple of lots of yarn. One in BFL (Blue Faced Leicester) and one in Romney. This is the BFL, I haven't photographed the Romney, but it's in muted pastels. 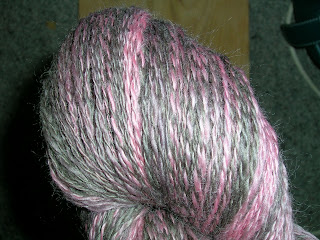 I've also finished my first pair of 4-ply socks for me, definitely have to do this again. 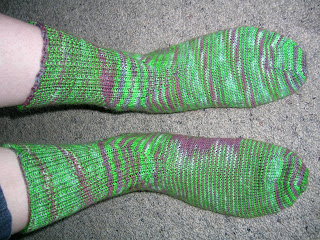 My next pair will be from some hand-dyed yarn from a TNN swap we did recently. 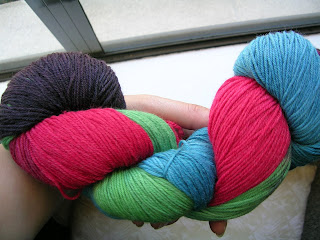 I've done some dyeing myself too, this for a Ravelry swap. It's merino dyed in pink and purple. I didn't want to send it cos I'm in love! Luckily I did send it though as it's recipient is also in love :) 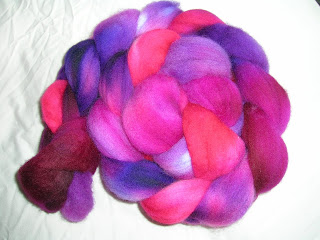 My current knitting is the Morning Surf scarf done in the red and yellow Rambouillet that I posted a photo of back in September. It's looking really good, but no photo's until it's finished. Once that's done I'll start the socks in the above red, green and blue yarn. I'm about to start spinning some merino/cashmere in a similar colourway to the above merino next. It'll be for the December spin-along on one of my Ravelry groups. I also have some mohair to spin, but I think that I may try out my new drumcarder to blend with something else. Not sure yet.
Posted by Rachelle at 10:12 AM 0 comments