This month Greenstyle Creations is running their annual Fit Capsule where you make 3 items from their patterns to create an fitness gear capsule.   I chose to make the Tempo leggings, the Jillian Tank and the Moxi shorts.   I also have a Power Sports Bra cut out in cotton lycra, but that's not sewn up yet.

So here's the finished items: 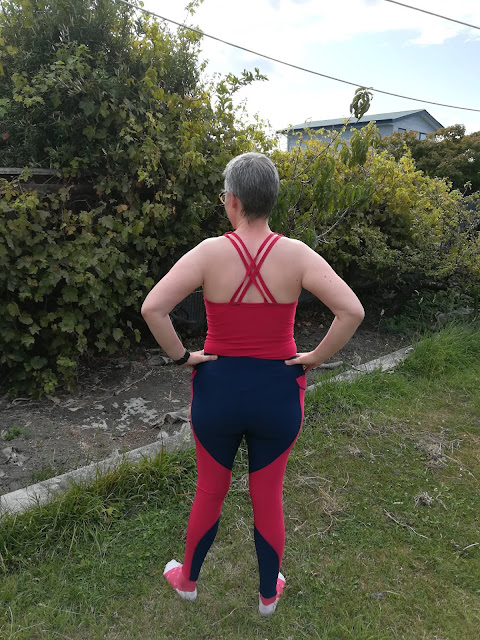 the pink fabric was a complete bitch to sew, it's some sort of swim fabric and none of my machines liked it.  My coverhem just said no, she's now up for sale on Trademe, not because of this, but because she also refuses to play nicely with woolly nylon; the listing mentions her foibles and what she's good at too.
My sewing machine started shredding thread, changed needles and it did it a couple more times.  She also skipped stitches.  Will see how she is with another new needle (different brand) and decent fabric; hoping she doesn't need a service.  Even the overlocker skipped stitches on this stuff, especially when adding clear elastic.  I will be ordering some proper athletic fabric to try out and making more Tempos in that.  I also have some custom printed cotton lycra to make another pair; I love this pattern!
Aside from the Greenstyle patterns I have cut out a custom fit t-shirt from Apostrophe Patterns in the blue print I used for the shorts, it doesn't have much stretch so I couldn't use the Greenstyle Green Tee.  After that it's probably time for me to make some casual trousers for Dh, I've got some nice green corduroy that'll work well and some grey wool flannel to use as a contrast; not enough of either to make pants, but together they'll do the job nicely.
Posted by Rachelle at 6:35 PM 1 comments

I've been seeing a kinesiologist and we've definitely made some progress on the bowel side of things, however I'm still getting muscle pain, tingling in my right foot and injuring myself more often than I should; it's also taking longer than it should for me to heal.  I'm figuring that I need to do more than I have been so I've been reading the Medical Medium books; well, I've read part of his first one and part of the Liver Rescue one which I got out from the library to read on my Samsung tablet.
I'm not ready to jump in fully yet, but a lot of what he writes makes sense to me so I'm going to slowly improve my diet to what he recommends and the first thing I've done it bought a juicer and started on this stuff: 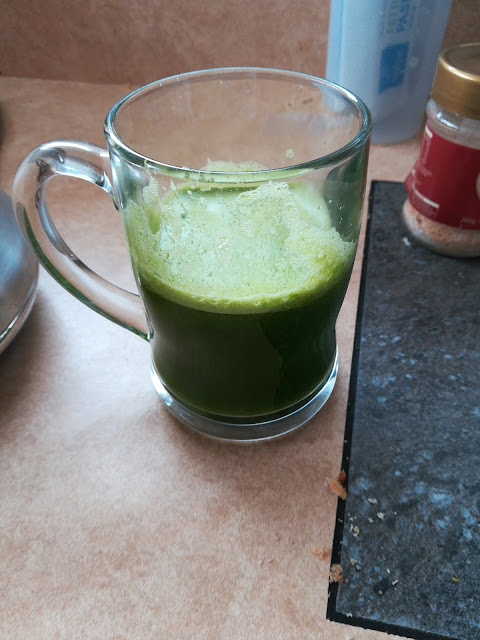 This is my first morning of taking celery juice (please ignore the crumbs, school lunches were prepared first).  I've never been keen on celery, but I'm really hoping I develop a taste for it, cos it's not very nice at the moment!  So the plan is I'll be drinking this stuff every morning and following it up with a fruit based breakfast which no fats to help my liver; then I'll be doing salads for lunch followed by a pretty much normal dinner so it won't impact on the family meals.   I can't start the whole thing till my physical book arrives in a couple of weeks from the UK; however I'll probably wait for a few months until I do the detox since I suspect it'll make me feel pretty awful.  A friend is doing it now and she's got vertigo and tinnitus and other things going on from it, considering I get those to some extent normally I have to expect I'll get them too.
If it works for me, then I'll see if I can persuade the family to change their diet to be more liver friendly, don't know how easy that'll be considering one's stuck in his ways and another is autistic.  I hope it does, sick of not feeling as well as I should be.  Certainly the dietary changes can't hurt, and they may well help.

I'm still knitting, but less than normal as one of my pain areas is both arms.  I have an ulnar nerve injury on both sides and my bicep on my right is tight and grumpy (that's not an injury, suspecting it has more to do with RSI).  Doing exercises for them and stretching as well as stretching for groin ache which came on on Sunday.   I've had that on and off ever since my first surgery, suspecting that is a direct result of how they treat your body when you're under so they can get to everything.  If it doesn't ease off that'll take me to the doctor just to get checked out.

I do have an answer for one of my problems, though, well it's probably an answer.  The dizziness I got after my 2015 turn looks like it's an after effect of a silent migraine.  I get this feeling like a piece of soft cloth (velvet) brushing through my brain for a moment; then I get tired and the next morning I'm absolutely wasted, plus the feeling off centre thing comes back and I have to start my balance exercises again.  My symptoms point in the migraine direction, especially the aftermath.  I had an MRI about a year after the first one so it's nothing really bad, but it's not fun either.

I have been sewing and am cutting out more stuff shortly; I need more workout leggings and I also need more undies without FOE as I seem to react to that when it's in sensitive areas; pity, it's so much easier to apply than cotton bands.
Posted by Rachelle at 9:06 AM 1 comments