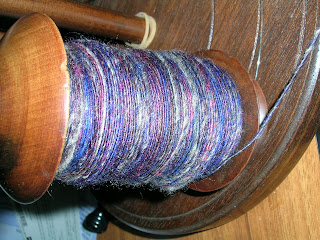 2 bobbins of singles from a silk, merino, mohair and yak blend spun up on my old Little Peggy wheel. 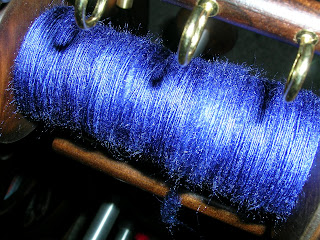 1 Bobbin of silk singles on my new Little Grace wheel. The silk is tussah and was hand-dyed by me. 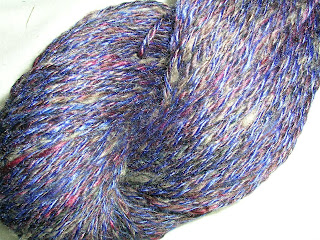 My first ever 3-ply. I plied it on my old Traditional with the jumbo flyer. There's 2 plies of the blend and one of the silk and it's so soft! 235m of beauty. All my wheels did a beautiful job, unfortunately I can't keep all of them due to space constraints, so I'll be putting Little Peggy on Trademe to sell soon. DH has the camera this weekend though so she's got a few days grace.
My Little Grace did a beautiful job; just as well considering how much she cost me! I am definitely in love though and already planning my next project. I have 50g of Romney to finish and some more silk to go with it to do my next 3-ply. I'm loving doing silk, even if this is not dyed by me it's still beautiful.

My wool combs are coming together now too. I've got all bar one of the first row of tines in one comb. Hoping to get the next row in today if I get time, but DH is away at a wargaming thing in the day so I'm kidwrangling today and tomorrow. I also got very little sleep last night due to having a nasty cold so I'm not sure if I'll be up for it yet. The weather's not great though so won't be gardening until tomorrow so I should get it done today. The boys will be watching tv today.

Tomorrow I'll be doing the traditional activity for Labour Weekend; gardening. I'll be planting corn, zuchhini and pumpkins (baby ones). My tomatoes aren't quite big enough yet; they'll go in later this month.
Posted by Rachelle at 8:39 AM 2 comments 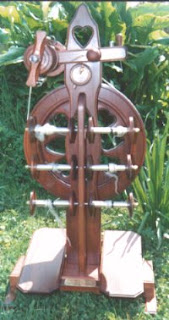 This isn't my wheel as she's not quite ready yet, but it's what she will look like when I do get her.
Posted by Rachelle at 8:04 AM 2 comments

Today I checked my savings account and I have enough in there for my new spinning wheel which was originally due to be ready next month (there's a waiting list). I emailed Mike to let him know that I'd saved enough; and no, I'm not going to tell you how much!
My Little Grace with tensioned lazy kate and 9 bobbins will be ready in about 2 weeks; he will then courier it down and if I'm lucky I'll have a small amount of English Leicester coming with it if I can get it organised. There will then be no further spending for a very long time! I've cancelled my Visa to make sure of this; the GE card is in the freezer in the middle of a block of ice and my Farmers card is only available for new Disney DVD releases and any necessary health supplements like the boys fish oils. No wool, fibre, fabric, other DVD's, sweets, icecreams etc.
I will endeavour to save a little as well so I can eventually afford my own drum carder for finer wools; my current second-hand one is more for stronger fibres. Merino or alpaca would die in it if I tried them.

Once everything's paid off then we'll look at saving to do the shower room and the flooring in the living areas and also pay off extra on the mortgage. We also have a couple of interest free HP's to clear. I think if I can stop the internet shopping it won't be that hard though, it's my uncontrolled spending that's caused the problem and I'm hoping that the fact that I now can't do that will interrupt my habit and form new, healthier habits. Saving and paying off all debt are 2 habits I'd like to have.

School holidays are almost over, thank goodness! George spent a couple of nights at Grandma's with his cousin and as a result Ian is now having issues with going to bed. He's just too bouncy and tonight he got his foot caught between the headboard and the mattress which didn't help. Hopefully a few nights will get things back to normal. Today was spent mostly watching TV with some outside interludes; tomorrow we'll drop off at my work, get some milk and then attack the vege garden. The winter crops will be dug in along with some compost so it's all ready for the potatoes and corn to be planted in the front garden. The back garden will need some serious work and I've told DH that he needs to help if he wants his peas this year. They really need to go in quite soon so that'll be his project this weekend.
Posted by Rachelle at 8:32 PM 2 comments

This is starting to take shape. The handle and head are together, just got to drill the holes now. Have cut some of the tines; 27 12" and 3 9" tines, but I need quite a few more. I'm going to have to get another 34 rods to get enough tines. Then will have to sharpen each tine (there are 70 for each comb). I'm making 2 of these combs so it'll take a while!
Once it's done I'll be able to prepare my own fibre. I've also got to check how many TPI my drum carder is too, once I know that I'll know if I need to replace the carding cloth on it.
Posted by Rachelle at 3:54 PM 0 comments