I've finally admitted to myself and most of the people I'm friends with that I'm a shopping addict.   It think I always have been but been scared to admit it cos then I'd have to do something about it.
Today I did my last spending, but it was on things I'd committed to before I realised the problem.   It came out of my spending money for the fortnight and there won't be any more.   Funny thing is I'm feeling quite good, my sewing mojo is on its way back which is great and it actually felt almost freeing knowing that I'm not going to be spending.
I think I may have to spend a little though, the computer is freezing on me, it's been to the shop and nothing wrong with the components and I've reinstalled XP after formatting the hard drive so it's not data related.   I suspect it's due to overheating and wouldn't still be happening if they'd cleaned her like I asked.  So tomorrow she's going back into the shop.

One good thing happened today though, aside from my usual session at the guild doing some knitting I went to WWKIP day (world wide knit in public) and I won a competition!   I'd taken Ian's jersey 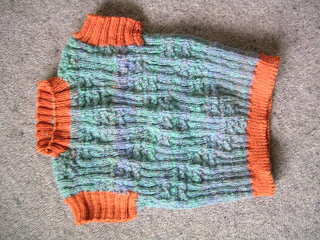 into the guild to show off.  I've been knitting this thing for 3 months now and I've hated it!   The pattern was a very large chart with lots of right and left twists resulting in a cabled look.  It's called Sherwood and is available on Knitty.com.   Unfortunately the yarn I was using which was one of my earlier handspun wasn't suitable for cables, and I didn't have enough of it to do the whole thing.   I finished the main part and decided to make it a vest with the wrong side showing.  Had to do it at night so the boys didnt' learn any new words.

Anyway, I put it in a competition at the WWKIP and it came second!   I won some lovely 10 ply yarn from Amy as well as a couple of magazines and a set of DPN's.  Was so chuffed :).   The ladies at the guild were all very impressed as well and now that I've finished it I actually quite like it.    Ian gets it for his birthday tomorrow.
Wish me luck with the horrible PC, we can't afford a new one so they'd best be able to fix it!
Posted by Rachelle at 9:00 PM 0 comments