Apologies for the tardy blog

I just don't seem to remember to blog, I post finished objects on Ravelry and TNN, but not here. It's not like I've been doing nothing either.
I've done some cleaning and tidying, kitchen and hall cupboards are all gone through and some stuff sold on TradeMe as a result. More to sell yet, really need to go through my wool stash and sell off some of that to make room for what's coming from Elann. Also cleaned the fireplace for the summer and done the rust kill and repaint of the top. Turned the compost and planted spring seeds. Still have to turn over the vege garden and dig in the compost before planting my spuds. They're sprouting quite happily. Will also plant corn in that section of the garden. Not sure what I'll do in the back though as all the winter vege are still there and are only just now starting to move.
On the sewing front not much has happened as I still can't find the sewing room, I need to tidy that desparately, however despite that I've made a couple of pull-up overnight nappies for George and a cover for Ian (which I've since lost). Need to make a couple more as I'd really like to get G trained overnight this summer.
On the knitting front I've made a neckwarmer and a scarf. This is the neckwarmer, it's knitted from a 2 ply yarn I spun from some Gotland samples and it's seriously yummy to wear! 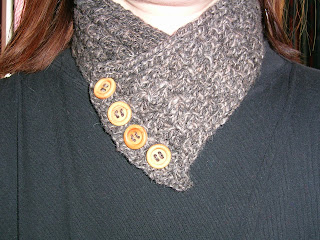 This is the scarf, it was knitted in Shepherds 3 ply baby wool using the Branching Out pattern from Knitty.com. It was my first ever lace and as a result there are some errors, but overall I'm very happy with it; especially after I dyed it pink. 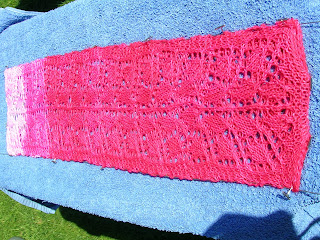 As well as all the knitting above I'm also working on a felted evening bag from the One-Skein Wonders book, I need to trial hand-felting using the John Q DK wool. I'd do it in the machine, but mine's a front loader so there's no control. Looking forward to this, I reckon it should look really good. I'm also doing a jersey for me in Patons Inca, part-way up the back atm and seriously considering having a third item on the needles; a pair of socks. Have to ball up the yarn first as it's currently in skein form, I got it as part of a swap from a talented Australian dyer Kattwings. I'm going to knit a toe-up pattern, just got to decide which one.

Now as well as all the above, I've also been working on a couple of new skills. I've tried needle felting and love it, so need to get some more of the needles as the ones I have are all fine and I need some coarser ones too. I'm also dyeing my own roving which is great fun. My first one was in shades of teal, spruce and sapphire and is truly beautiful; unfortunately I have other things to spin up first. My second was for a yarn swap on TNN so I can't give any details here until she's got it; won't be long though as I posted it yesterday. Suffice it to say that the colours aren't ones I'd normally use, but it looked fantastic after I spun it up and I hope she'll be very happy with it. I still have 800gms of merino to dye up yet, I can guarantee I'll be doing more and if I continue to get these sorts of results I may even sell the odd one. Here's the first one anyway 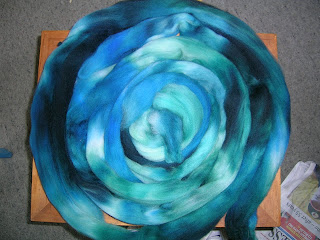 I am so in love with this that it's not funny. Gotta do more.......
I am also teaching myself to spindle spin so that I can spin when I'm out and not able to access my wheel or not in the mood to knit. Really enjoying it, though oddly I'm using my left hand to draft and my right to hold the fibre, whereas when using the wheel I'm the other way around. It's interesting to see how much more quickly I'm improving on the spindle than I did on the wheel, I've only been doing it a week and I've already gone from slubs to an almost uniform single. I'm using a 65mm Ashford top-whorl atm but have a Kokovoko bottom whorl to try and a Ghstworks spindle on the way (top-whorl). Yet another addiction to add to the list.

Spinning wheel has been busy too, this is some of what I've spun in the last wee while; hope I haven't doubled up on previous posts. 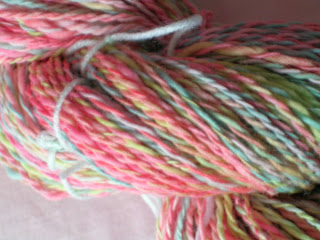 This is a Rambouillet/Targhee/Merino blend and it spun up really nicely. It's not in a colourway I'd normally go for, but I love it all the same. It's a Squoosh roving. Not sure what it'll be yet. 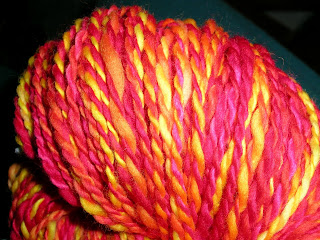 This is Rambouillet from ColorfulWorld (I think), Rambouillet is a bit harder to spin than the blend, but it was still nice. It's going to be a scarf. 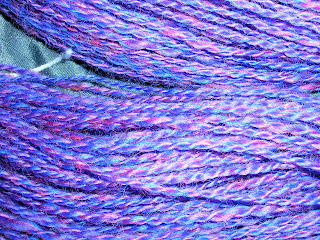 This is a Romney from TaiTap Wool Carders, the roving was blue with a red streak and has spun up looking purple. It's not soft enough for a scarf, but would probably make nice mits; will see how I feel when I'm ready for it. Love the colour though.

The Important Stuff
The boys. George has been having some issues at school again, a bit of hitting and not concentrating in class. Have to try and remember to give him the fish oil to see if that helps. Other than that his new teacher is great with him, she's working with him and us to help him get past these issues and he is definitely improving. His reading has gone up a level and when he reads at home it's much better; he's sounding out words without me having to fight for it which is great! He's also starting to write stories. He got to bring the toy for the best person of the day home on Friday (Pumpkin) and wrote a little story about how Pumpkin watched him in the bath. I was very impressed. He's still addicted to the computer though, and the TV. He did spend some time outside this afternoon though after he realised I wasn't allowing either of them to go on this afternoon.
Ian is talking a lot now, we've had some definite progress in that but still having issues with the dinner table and some of his physicality. He's still trying to climb all over us and kicks out when frustrated. We're hoping that will abate as his language increases. He'll have to stop a bit anyway as DH has just had cortisone injections for a bad shoulder and isn't allowed to do the usual stuff with Ian for 2 weeks or more. Aside from all that Ian is still running away if you give him a chance so he's still in the pram atm. He's run away from Grandma's twice in the last month and also tried to commit suicide when leaving kindy by heading for an SUV on the road. Luckily I got him just in time; gosh he's fast though! I'm really hoping that will improve as we need to try and get him walking with us rather than away from us by the time he starts school in June.
Posted by Rachelle at 8:19 PM 0 comments