Progress on the chair.

Despite some hiccups, mostly involving the silly staple gun jamming, I've managed to get the chair re-sprung.  I've also bought an upholstery staple gun and contacted the place I bought the heavier gauge one from to let them know about the jamming issue.  It's now a week since I emailed them a video of me using it as requested with no response; I'm feeling distinctly unhappy about that and will be ringing them on Monday if I don't hear anything by then. 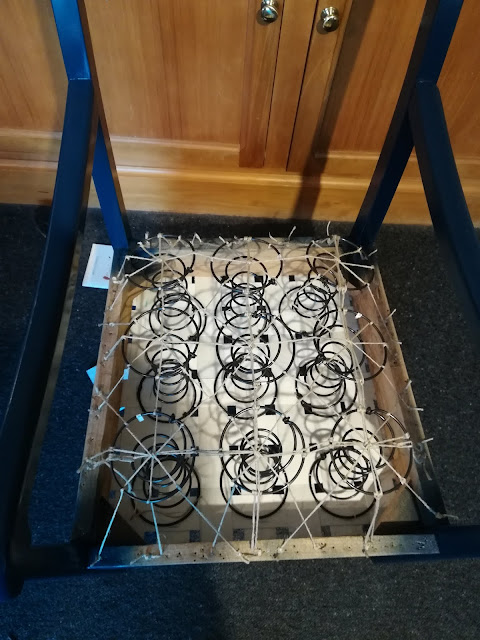 As you can see it's now fully sprung and I've done the 8-way tie.  Unfortunately there's a couple of places I had to redo as the staple gun also cut my string a few times; I'll have to recheck it all before I put the first layer of fabric on it.

I've also started sampling for the fabric I'm weaving for the chair.  I can't do the main fabric until the chair has that first layer finished so I can get semi-accurate measurements.  Once that's done then I can warp up and get weaving.
I'm weaving at 10EPI and I'm happy with that on the loom, it remains to be seen what it turns out like after wet finishing of course. 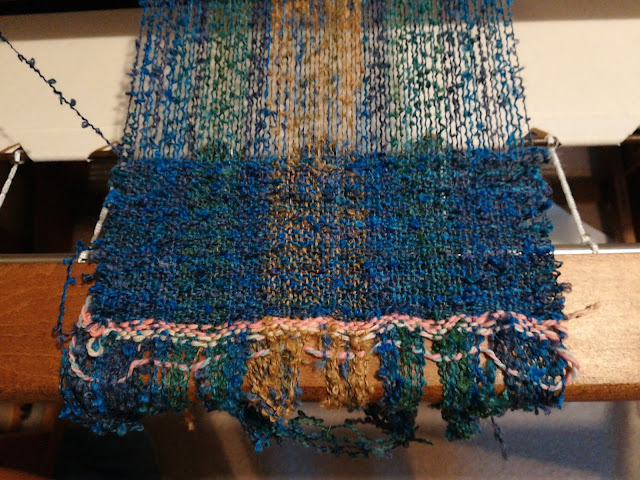 The yarn is a Romney boucle, it's not as easy as I'm used to due to all the lumps in the yarn, but it's actually behaving itself better than I expected.  I'm having to be careful to just use the beater to place the yarn as I'm aiming for an even weave with 10 picks per inch approx; though I will also trial a section with a harder beat to see which works best in the finished fabric.

This weekend will hopefully see me finish the sample and also get that first layer of fabric onto the chair as well as making the edge roll for the chair.  The only edge roll I could get here was an extruded foam product which is something I wasn't prepared to use.  Instead I'm making my own using the jute webbing and filling it with wool roving.  The reason for the edge roll is to soften the edge of the timber so the fabric won't wear through where it goes over the edge.  I want to get this finished so I can then move onto making my weaving stool.
Posted by Rachelle at 7:25 PM 0 comments