The socks I was knitting for Ian?    They got 10 rows into the leg and then I tried them on him, no way in a month of Sunday's was that ever going over his heel so it's off to the frog pond.   I chose what should have been the right size, so the next thing I decided to try was putting on a sock that I knit for me.
It fit him pretty well!   So instead I might try the smaller version of Scott Base Socks for him and see how that goes.   At least the main rib is standard!

Oh, and no work on the floor today, our flooring guy is sick so now it's changed to Monday.   It's jinxed.  The tiler was true to form and didn't show up this week at all.

Good news though, my order from Webs showed up, I now have 4 skeins of Madelinetosh Pashmina in Tart, it's delicious!
Posted by Rachelle at 2:21 PM 2 comments

When is it too much rain?

Luckily it's stopped raining, the flood water was pumped down our drain, which meant me checking it fairly frequently in the hopes it didn't break its banks and the drain is now down to about 6" off the bottom which is much better; at least I think it's 6", it's hard to tell through the mucky stuff that's masquerading as water down there.

In renovation news our floor was meant to be down today, unfortunately we hit a snag, quite an expensive snag in as far as the flooring we have has reacted too much to temperature changes after being stored in the conservatory (post earthquake, pre-quake it was in the dining room) and is not prepared to stay put.   We have to buy new flooring, and we chose it this afternoon, not happy and we're going to see if we can claim on EQC/insurance as it would have been fine had we not had to wait for EQC to get things sorted.   Not holding my breath on that one though.
I'll pick the new flooring up tomorrow, hoping it'll be laid on Saturday as all the prep work has been done.   Wish us luck!

In knitting news I've got a few rows into the cushion cover and am not sure if my floats are long enough, but it's hard to tell on circulars, I think it should block ok.
Ian's socks are almost to the end of the ribbing on the first one.
No sewing, can't move in my sewing room, or the lounge either.
Posted by Rachelle at 7:47 PM 0 comments

Well, I really finished it on Wednesday night while Dh was in Auckland, but he didn't get to see it till today so I'm counting it as done today.
His Scott Base Socks are completed! 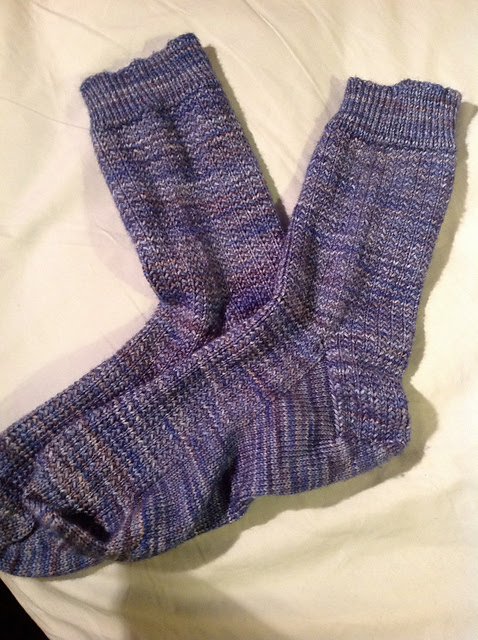 I would have run out of yarn if NZlulubell on Ravelry hadn't come to the rescue, thanks for that!   Next pair will be shorter so I don't run the same risk again.   He doesn't get this pair yet, they need to go in for 2 exhibitions first.
This was part of Matariki Crafting
Next I'm working on socks for youngest and the cushion cover for the guild, and of course I need to pull out the fibre I'm going to spin for the Tour de Fleece.

Monday our flooring gets started, will be a short period of mayhem here and then hopefully things will get back to normal.
Posted by Rachelle at 2:33 PM 5 comments

Photo's as promised plus a birthday

Yesterday Ian turned 9, I have no idea how that happened, seems like yesterday he was just crawling!    He's doing really well at school, the previous day he came first in the maths challenge which he was really proud of.    He's doing his 8 times tables and getting them right too, his brother is 18 months older and doing the same tables, but he doesn't have the same strength in maths that Ian does, he's a reader instead.
Ian got a fair bit of Lego Ninjago for his birthday, plus a book on snakes and lizards and a brainbox kit.   We also went to Orana Park despite the weather and had a great time.  All the photo's are on my old camera, wasn't prepared to take the DSLR with rain threatening.

He had a great day, chose what he wanted for lunch, had visitors, chocolate cake and finally got on the computer at about 3pm!

I got 23 rows done on Thomas' sock yesterday when we got home and our visitors all admired our finished painting.

I only need to do a little wallpaper repair work in the lounge now and we're done for a while, plus of course the doors and doorframes and windowframes, but they're not urgent till I open the tin of paint I got.   It's not tinted so won't go funny if left for a while.   I also need to think about what I'll paint the doors in here with.   At the moment they're still skyblue, they're louvred so tend to stand out a bit.  Someone suggested a slightly darker version of the main paint, but I'm thinking maybe slightly lighter with the frame done in the lighter shade as well.   Might have to get a 1litre tin of the same base in white and add it till I'm happy.

Fire is still wrapped up and will be till the flooring is done, hope that's soon, but not too soon as Dh has a trip up north later this week and I'll need his help to shift the bigger bits of furniture.
Posted by Rachelle at 1:08 PM 0 comments

Photo's will come, I promise

But for the moment I'm too busy!   The professional painter finished on Friday, the builder finished outside this week and he re-grouted the tiles in the conservatory, if the grout cracks again then we need to get Fix-It to put a variation in to EQC.   We'll see what happens on that.    We have a new toilet as well.
The only 2 things we're still waiting on from the house repair are the tiler to replace the kitchen bench hot-tile and the chap who's going to resurface the shower base.   I wish they'd hurry up!
I don't count the flooring, cos although it's being done through Fix-It the job is not earthquake related, even if the earthquakes did put it off for several years.
In the meantime I've just finished (I hope, won't know till daylight tomorrow) painting the laundry.   Interesting fact on this, my plastering which isn't as good as I wanted, is no worse than that of the painter who's been doing it for years.   At least now the wallboards are all sealed, so if there's a leak from the tub then it won't do any damage if we get to it quickly.   There was evidence that there has been one in the past, wallpaper does not seal a wall and the original owners didn't put gib-sealer on the walls.  Now there is sealer and 2 coats of Resene Robins Egg Blue in a semi-gloss finish; much better.

There's only one room left to paint now aside from the lounge (which we like as it is), that's the boys room, but it'll wait till after George moves into what is currently my sewing room and that depends on when the garage goes up.   The plans are at the council, no timeframe on that and if you've been watching the news you'll know why I say that.   I'm figuring probably 8 weeks, but I'm happy to be pleasantly surprised.  Oh, and I do need to paint the doors and window frames, but no hurry on that one.

In crafting news there's been no sewing due to a distinct lack of room in the sewing room, there has been some knitting on Thomas' socks, I'm now up to the gusset decreases, and I've cast on for the sheep cushion cover for the guild rooms.   I'm using the Snowy Sheep Pillow pattern but I've changed it to knit in the round with a steek; gonna cut my knitting for the first time!
I may have visited Knitworld's sale too, got 2 jersey lots of yarn, 1 DK and 1 worsted weight.
Posted by Rachelle at 6:08 PM 1 comments

Not even time to breathe!

At least that's what it feels like at the moment.   Lots going on with the repairs, the roof is completed, and that was just before our first snowstorm of the winter (much earlier than normal).   Inside is getting there, the boys room is almost finished, and the shower room is finished (they were doing the ceiling, I did the walls).   I'll post a completed photo later.

Very little knitting as I've got urgent work and I'm so distracted at the moment my hours are all weird.


This week the painter will I hope finish our room, the laundry and the lounge and get a fair bit done on the dining/kitchen area.   Then I can plaster the laundry walls and get them ready to paint before the flooring gets done.   The tiler will also be doing the bench tile and the conservatory grouting this week and hopefully the plumber and painter will get the toilet completed too.
There's still a little to be done outside with the mortar and 2 stone blocks to replace on the south wall.    The garage plans are almost ready to go the council, will be glad to have that underway.

I really want to get back to normal though, I've got knitting to do for the guild as well as for Dh and youngest.    Plus I'd really like to get our house back to just us.
Posted by Rachelle at 7:19 PM 0 comments