DH has the week off and today we spent the day doing a few things.  He played Conduit on the Wii, I played Borderlands on the Xbox; we did this turn about.  While he was on the Wii I was doing some sewing on pyjamas for Ian and myself.  I also did some knitting on my Webs cashmere tam and realised that the stitch markers I was using were too heavy for easy knitting.   This is what it looks like atm 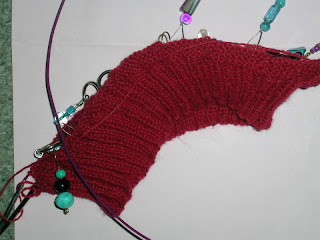 The big ones are going to be replaced with these, which I whipped up this evening.
It should make it much easier to knit with as they're much lighter and shorter.  I used split rings instead of jump rings. 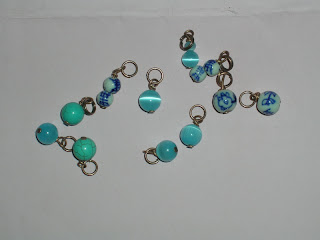 I had a wee parcel arrive today too, a book called Simply Shetland 4 at Tomales Bay, some lovely patterns in here, inparticular one for a colourwork jersey which I really want to knit.    I will make one change though, it has a very, very low scoop neck; I think this will become a much higher neckline. The package also included some silk noil and some camel fibre.
I was bad as well in the last couple of days, I've got into Vintage Purls winter sock club and I also ordered a couple of skeins of sock yarn today and some books too.  I've ordered 4 of the Harmony guides; the colourwork one, the cables one, edgings and lace as I'm finding a lack in my books now that I'm designing.  I'll have to be good from now on, I'd budgeted for the sock club, but not the rest.  Only one more thing to do, I'm expecting some samples of Suri Alpaca, which I will be purchasing some of, but not too much.
I think that's all for today, still lots to do over the next few days; sewing, knitting, dyeing yarn (that's secret squirrel though)
Posted by Rachelle at 7:43 PM 1 comments

tThis morning I was going to go to the Heathcote spinners guild and knit all morning.  Unfortunately someone decided I shouldn't do that and gave me a child who's currently sitting in front of the TV watching Return of the Jedi with a bucket, sigh.  I might still get some knitting done, but I won't be working today until he's better or in bed as I can't risk vomit all over my work (Merino/Possum knitwear).  I guess I'll just have to knit, read and hope he's better tomorrow as he's supposed to have several things on.

I'm going to take a look at a book that arrived yesterday, Get Spun by Symeon North.  Looking at it so far I think it's a reasonable book, but probably more for a beginner.   It's got small sections on dyeing, blending on a drum carder and spinning art yarns.  Unfortunately it doesn't cover spinning feathers and down which is what I was hoping for.   It's got a decent section on spinning in beads and felted balls, but I have that information in other books. To be honest if I'd seen it first I probably wouldn't have bought it, I have other books that cover the same info just as well, but in more depth.  I'd recommend "In a Spin" by Pat Old, and Intertwined by Lex Boeger for art spinning.  Pat's book covers more conventional spinning very well too.  For dyeing, The Twisted Sisters Sock Workbook or Hand Dyeing Yarn and Fleece; both are excellent books.  For blending I'd recommend Color in Spinning by Deb Menz.

There are lots of other good books too, but I'm thinking what I might start doing is to review the books that I have here that are still available on Amazon or The Book Depository and let you know what I think of them.  That might take a while as I have a heap of books here on knitting, spinning, crochet etc, but it'll be fun too.
Posted by Rachelle at 10:03 AM 0 comments

My swallowtail shawl is finished finally and it's beautiful, but I prefer a little more shaping at the top, it's hard to wrap properly with it being completely straight. 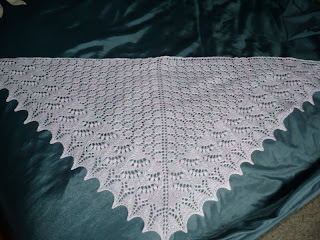 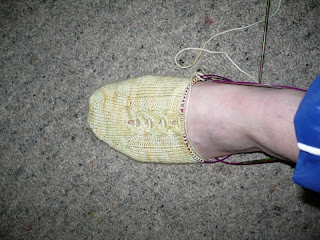 I'm rather pleased with how this is going.

I've had a book arrive recently too; Heirloom Knitting by Sharon Miller.  It's all about Shetland lace which I'm looking forward to having a go at later.  I'm doing a spinning course atm with Margaret Stove learning to spin really fine; the aim is to be able to spin a yarn that can be used to create a wedding ring shawl.
Posted by Rachelle at 10:55 AM 2 comments 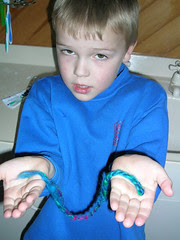 George's spinning
Originally uploaded by sewsable
Both boys have decided they want to learn to spin so I pulled the old Wing wheel out of the garage today, cleaned it up and put a new drive band on it. It's all set up now and George and Ian both practiced treadling. George couldn't quite manage to treadle and draft, but with some treadling from me he got the drafting worked out (mostly) and did a really good job on this wee bit of fibre. We doubled it back on itself to ply as he's not quite up to filling 2 bobbins and plying yet, but this worked fine. We then shocked it in hot and cold washes and it's drying in the bathroom now. It's some of Anna Gratton's Corriedlae which seemed like a good beginner fibre to me.
George is keen to do more, but I kept the first session pretty short as I want him to be keen to try again later.
Posted by Rachelle at 4:18 PM 1 comments 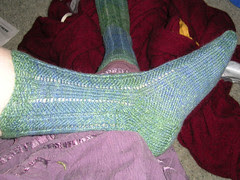 broadripple
Originally uploaded by sewsable
My first pair of handspun and hand dyed socks are finished! I love, love, love them! Comfy, pretty and all mine (insert evil laugh). So I'm back on my Swallowtail shawl now, it was going to be for Mum, but seeing as she thinks shawls aren't really practical I'm doing it for me and I'll do her a nice lace scarf instead. Got some time for that though as it's for Christmas. The shawl needs to be finished by June if possible so I can show it off as a finished object for the TNN shawl yarn swap.
I will be casting on another pair of socks on the 15th May, I'm taking part in a KAL (knit along) for Theodora socks along with a whole bunch of other people. I'm not buying the official yarn which is a deep purple, I'm using a yarn called Buttercup which was dyed by the designer, but is a light yellow with tinges of green. It'll stand out when compared with the rest.
Posted by Rachelle at 9:21 PM 0 comments