I've not had time for blogging, or for knitting or sewing either.   I've done the mending pile and I have managed some knitting on T's sock, but not much and I haven't taken a photo yet either.

Instead I've finished painting the rooms, with T's help.    Sorted the kids winter clothes and my winter clothes, shifted furniture around, cleared out the storage unit and handed in the key.   Had some sod back into my car at Mitre 10; he said it was his fault (and it was, he didn't look and backed out very fast) and then told his insurance company a whole other story (lied) and because there were no witnesses we're stuck with paying another excess to get the car fixed.   His car got a small scuff on its bumper, mine lost the back light.

Today I got some more storage solutions for my room; 2 MDF shelves that I need to paint and the supports for them, as well as a cube storage unit which will be for my yarn (some of my yarn).    Once the wardrobe guy turns up things will get better in that room, but I think even then I won't be able to fit everything in straight away.    G will have to share his room with some of my stuff for a bit.

Eventually I'll have to make a blind for the window in there too, but not quite yet.    I still need to swap out the curtains in our dining room for the ones I was given, same thing in G's room which will then free up the original curtains for repurposing into blinds.

I've listed a bunch of things on Trademe, no yarn though.   It's stuff like trampoline nets (which we won't use), a pair of mohair rugs (that we also don't use as we have carpet), carseats, a gate and soon some shoes, a movie, xbox game etc.   There may also be a wooden umbrella swift to go on too; never use it as I prefer my skein holder instead.

Hopefully I'll have something to show you all next week.   Ooh, and I'm going to try doing my nails with Gel polish; bought the starter kit this morning, I'm sick of normal nail polish that chips or smudges before it's even a day old.  Apparently gel is much more robust.
Posted by Rachelle at 4:07 PM 0 comments

Tomorrow morning my eldest son and his dad will be getting up early to go the ANZAC parade with the Scouts.   They will remember those who fought to keep us free of tyranny and those who gave their lives for our futures so many years ago.

Everything his closed here for the first half of the day except the essentials like hospitals and probably petrol stations.   Some will complain, but we won't be among them; this is too important we must not forget the sacrifice made for us, no matter how many years go by.

Let us remember and honour those who lost their lives, both at Gallipoli in WWI and in subsequent wars.
Posted by Rachelle at 8:28 PM 1 comments

The garage is getting closer.  I've done the first coat of ceiling paint today and hopefully tomorrow will be the second coat of that and the first coat of the wall colour.   We've cleared out the deck and playhut so all that stuff is now in the garage.    Half of it will have to be thrown out due to damage from the weather though.   Nothing we can do about that.

In other news our dryer went and reached the end of its lifespan; I suspect it came uncomfortably close to igniting as it sounded awful and was hot on the front.   It's now out in the garage and we now have a new one.  I'd have preferred to get the old one fixed, but 3 years ago we were told that spare parts are no longer made for it so I knew there wasn't much point.   The new one is an Electrolux and is much higher star rating (6 stars vs 0 stars).   It wasn't cheap, but I needed a condensor dryer and you pay extra for that; definitely worth it.   I have to recommend Luke at Harvey Norman Tower Junction, very helpful and friendly. 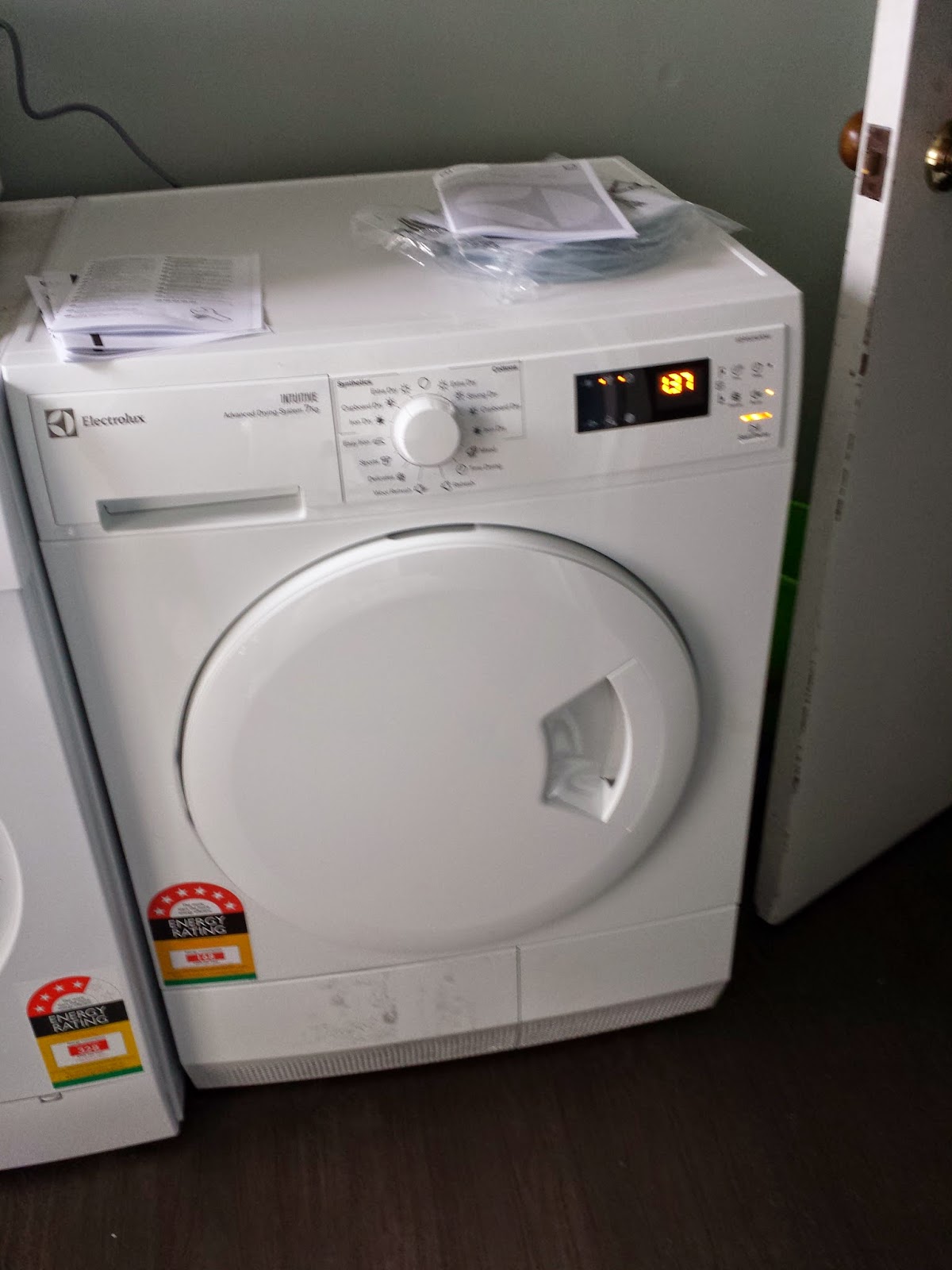 It takes longer than the old one and has way more options than I'm used to (ours had hot or cold and a timer), pity about the budget, but can't be helped; we need a dryer in winter, especially if the wet weather keeps coming.

In knitting news I've finished my hat, all bar dyeing it.
It's so squooshy and soft!

I've also started my next project which is a pair of socks for Dh.
I've knit this pattern before and Dh liked it, so doing it again in a slightly tougher yarn this time.  Last time he got some lovely mcn (merino/cashmere/nylon) yarn, but he blew through the soles and this time I want them to last so he's got some tight twist merino/nylon by Wandering Cat Yarns instead.   I love the colourway, it's subdued enough to wear to work, but the little hint of green gives it interest.

No work done on my polonaise dress yet, it's something I need to be able to devote a chunk of time to and I just haven't had that recently.
Posted by Rachelle at 8:12 PM 0 comments

Our driveway was finished yesterday morning, the guys turned up to do the expansion cuts (at 7.50am) so now we're just waiting on next Thursday before we can drive on it.   It looks amazing and we're so pleased!

I've been priming all the wood in the rooms, tomorrow will be sealing the gib board and then I can start the real painting of the walls, and then the window and door frames.   Hoping to have the walls and ceilings finished on Wednesday and then the next day or two on the frames.

Also have to contact the firm that did our earthquake repairs, I noticed today that the ridgeline has lost some of the cement work that they did and there's no way it should fall off that quickly!    As well as that one of the vinyl planks in the kitchen has come off the kick back area; I'm putting that down to them not fully removing the old vinyl.   I've emailed them last week, but no response so it's time to call them.   If no luck then I'll be naming them on here and FB.  They have a 5 year guarantee though so it should be ok.

In knitting news I've got some work done on my hat in Sezza's KAL, I'm not happy with the colour so will dip-dye it once it's finished.  The yarn however is yummy soft!
Once I finish the hat then I'll cast on for my next KAL which is the Game of Thrones KAL being held by Valerie of Wandering Cat Yarns.  That will be a pair of Riverrun Socks in some WCY sock yarn.

Posted by Rachelle at 5:37 PM 1 comments

Um, there might have been yarn in the last few days

I know I'm on a yarn diet, but I'm afraid I fell off the wagon somewhat.    I had a need for something squishy after all the work and in one case my yarn was end of line as the dyer is going to stick with fibre from here on.    So here we have some squishy loves for you to drool over.

On Wednesday night I finally finished Ian's socks.   He wore them on Thursday and seems happy with them.   Downside is in the time I've taken to knit them his feet have grown, so they now fit perfectly rather than having a small amount of growth room!
I'm now working on socks for Thomas as my travel knitting and will probably be casting on another pair for him on Monday for the KAL with Wandering Cat Yarns.   The KAL is Game of Thrones themed and must use either WCY yarn or patterns; I'm using both.

I will still have limited crafting time though as I need to get painting in our rooms, however I can't do that till the driveway has cured enough to walk on.   Today we finished prep for the driveway and the garage was almost finished too.   We have moved approximately 12 tonnes of pavers and hope many of them will go to friends and family, some will be used by us and we will try and sell the remainder on Trademe as quickly as we can.

The garage now has power and phone, we have keys for my room and T's room, but not the remotes for the garage and won't get those till we get and pay the final bill (hoping it won't be too much higher than the original amount).   We will start moving in once we own it and once I've done the painting.    Can't find the drop cloths which is a problem though, have only found one; not enough, and we do need them as the carpet is also down now.    Feeling pretty happy and really looking forward to a week from Thursday when we can drive the car on the driveway!

Btw, what happened to all the base course that was under those pavers?   I know it was there cos we put some of it there when we relaid the whole thing.  Did the earthquakes just swallow it up?
Posted by Rachelle at 8:32 PM 2 comments