Well, just found out that both my boys are gluten intolerant. We had blood tests done for IgG levels. Normal is between 1 and 20; George's was 49 and Ian's was 61! We're not going gluten free immediately as I want to check for milk protein issues first, so we're taking a couple of weeks with no dairy before going gluten free. I'm hoping that the milk won't be a problem because that will mean we can still have cheese.
So, no more takeaways, no more bought bread considering the bought versions cost $6 per loaf which is daylight robbery! I've got us a juice fountain a new toaster (the old one was dying anyway), and I had enough fly-buys points to get a waffle maker. Unfortunately I have no idea where I'm going to put everything and the stuff we're keeping is going to have to be scrupulously clean so we don't have cross contamination (another reason to wait for a couple of weeks).
I'll put all the wheat based stuff in the hall cupboard so it won't tempt the boys and I'll have to bake often which I don't do now.
I'm also going to be looking into seeing if I can get a referral through the public health system to see Rodney Ford (Dr Gluten), he's too expensive to see normally and if he confirms George is gluten intolerant we may be able to get WINZ support to help with the expenses involved. We already get if for Ian as he is on the Autistic Spectrum.
DH isn't 100% committed and probably won't be until we see results, and maybe not even then, it may well be considered to be a "coincidence". We have seen big results with Ian from the use of Efalex fish oil, but there is still a way to go; and George has some major language delays. Even at almost 5 he's still hard to understand so I think it's well and truly worth a try.
Posted by Rachelle at 7:35 PM 0 comments

Well this is my final post for today, the others were catch-up posts; this one is addressing an issue that rather worries me. I'm mostly worried about how it will affect my ability to access supplies to keep Ian from descending back into grumpy Autistic child. He's on Efalex fish oil and has improved greatly, the idea of not being able to source that anymore is rather scary. I'm hoping that peak oil will be further off than believed and that when it comes bio-fuel will still be able to be used for shipping so that we can still get that sort of thing.
I'm not too worried about power or food here as we are a mainly agricultural country and most of our power is hydro, with some coal. If we stop selling our coal off to China we should be ok on that front too, at least ok for long enough to adapt. I can see the possibility of rationing though, similar to what happened in WWII in England. Our access to free wood for the fire may be compromised though as we won't be able to drive out to the farm to get it, hopefully they might get a horse and cart and we can sort something out for that (the chainsaw might not be working though)
Funny, you don't realise just how much oil is necessary in our society until you sit down and think it through. Although I work in an industry that makes woollens a lot of that depends on transportation, the dryers are run on gas and I couldn't fit many jerseys on the back of the push bike.

Just been watching the news on another front. They're going to be asking all women and children who go into hospital if they've been victims of abuse. What about the abused men? I think it's a bit shortsighted concentrating on just women and children. Sure they are the main groups that are affected, but there are men who are in the same situation who find it even more difficult to talk about it as it's not considered "manly".
Posted by Rachelle at 6:24 PM 0 comments 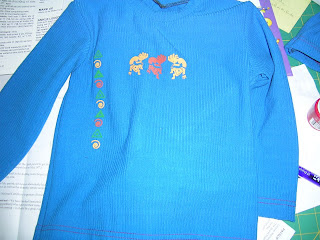 My latest sewing, 2 tops for Ian using a 2 way stretch knit from Fabric Vision's remnants table. I think it cost about $4 for both. The one on the top has velvet iron-on's in an aboriginal style print. The flame was a free-hand fabric paint attempt. It's still holding up quite well a month or so later. Both boys want to wear it, they both fit the same size in tops now! 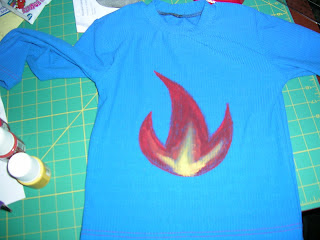 The jersey I knitted in 14 ply thick'n'thin yarn for a friend's son. Apparently it fits really well, a bit long in the sleeves, but that's not a bad thing for growing boys. The yarn was Naturally Colormate 100% wool. Nice to work with and quite soft. I'm going to do one for one of my boys for next winter in Teal (I love knitworld sales!) 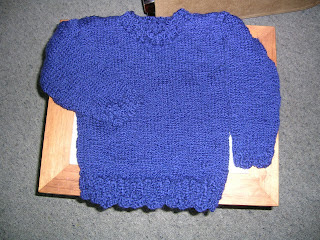 I made these trousers for our neighbours newborn. They're size 1, so will be for next winter but they are so cute. An Ottobre pattern, I used remnants from the last pair I made (which I forgot to photograph before posting off). The brown was the remnant and the red goes so well with it! My neighbours were surprised, but pleased to get them; and I got to meet their 6 week old son who was very cute and having a good look around. 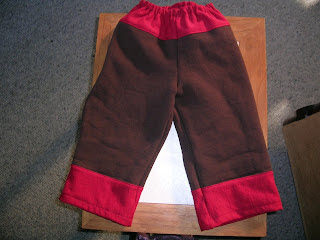 Posted by Rachelle at 6:11 PM 0 comments 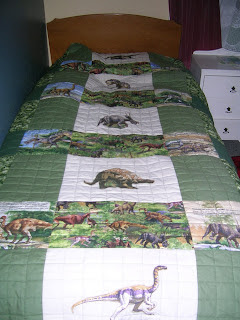 Well, it's been a while since I updated this. In the meantime I've finished George's quilt
He's very proud of it, and so am I!

I've knitted both boys a jersey in merino possum wool, very nice to work with though lacking body a bit so will stretch. 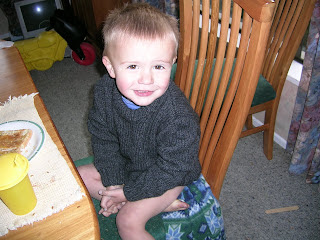 I've also knitted my first ever pair of socks, unfortunately both boys are growing at a rate of knots and they won't fit Ian past this winter. They turned out really well though! 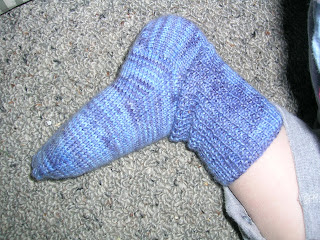 I'll have to knit more for next winter as it's really hard to get woollen socks for children over here. Strange considering we're in a country full of sheep, but there you go.


I've also done some sewing, but I'll post that separately.
Posted by Rachelle at 5:05 PM 2 comments

It's been a long weekend, been very busy! Yesterday I washed the outside of all the windows as well as the inside of the bedroom windows. Ick! George helped me with the outside, though I think they might have been cleaner without his help, lol! I also did quite a lot of work on the garden; pruning roses and dug one out as well as rediscovering the vege garden. It'll be interesting to see how that goes in the Spring after George planted several bean seeds.

Today was mothers day so I got to spend the day in the sewing room. Finished Ian's jersey and cut out 2 t-shirts for him. I also got DH's ironing done and some reading. I'm about to sort out some Burda mags that sold on TradeMe yesterday and then I'm going to play some computer games to round the day off nicely.
Posted by Rachelle at 6:22 PM 0 comments

Winter singlets and update on quilt 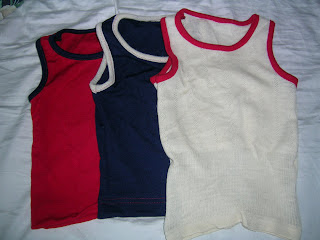 Just finished making 3 singlets for Ian from Ottobre 2/2005 #19. 2 are from offcuts of merino knit from work, the third (cream) is from an old singlet of mine which had gone under one arm. The rest of it was in good nick so I decided to turn it to good use. I used my Janome Coverpro for this and it did a really good job.

I'm also working on my first quilt, ran out of thread today so will have go shopping for more. I'm currently doing the actual quilting, once that's done then I'll just have to bind it. I'm making it for George (my eldest). It's a dinosaur quilt and uses a mix of piecing and applique. Looking really good and I'll post a piccie here when it's finished.
Posted by Rachelle at 5:27 PM 0 comments

Well, tomorrow I get to go into the Fertility place, take a whole load of drugs and hand over a bunch of eggs. I won't find out who's getting them, though I will get to find out if they actually have a baby.
I'm glad it'll be all over for my end though, feeling a bit bloated atm and it'll be nice to get our fridge back too. I'm going to take in one of my nappies to give to the recipient (The Fertility Centre will be doing the giving) and then that's it for me. I'm too old to do it again now, but I've given 2 couples the chance to have children of their own. I really hope it works for them, hopefully the nappy will be a good luck charm.
Posted by Rachelle at 7:41 PM 1 comments 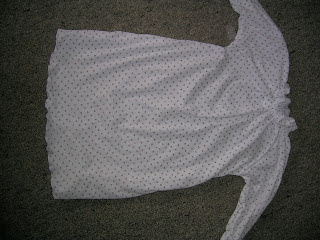 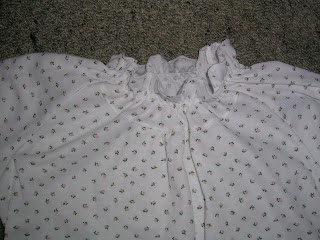 Here's the nightgown I made to go with the little jacket. This is also an Ottobre pattern. Very cute, however no girls to take a photo of it on. This was my first attempt at shirring and I think it worked out quite well. The fabric was some my MIL gave me which I've been wanting to use, but didn't have a project for; until now!
Posted by Rachelle at 7:25 PM 0 comments

A replacement SS and others 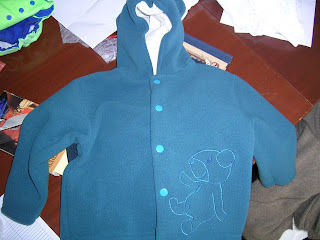 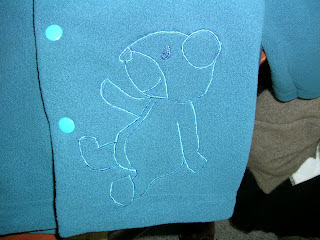 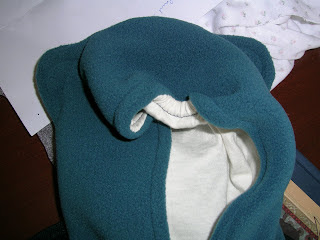 One of the ladies on TNN unfortunately didn't get her SS present, so I volunteered to replace it for her. I've made a couple of items from Ottobre mags for her children, her hubby and herself got much more prosaic pressies (toffee and nuts).
For her young son a jacket in Malden Mills 200wt fleece with a lined hood (organic cotton jersey). Unfortunately I can't do a photo on as both my boys are too big now to fit this.
Posted by Rachelle at 6:09 PM 0 comments