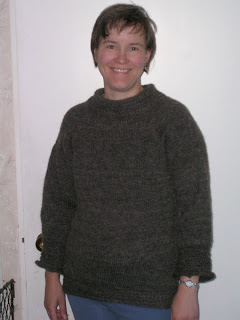 This picture is unfortunately unblocked, but it's currently blocking and used approximately 1005m of my stash. Once it's blocked I'm going to get DH to take another photo and show that off; the sleeves should block to length.

On another tangent I've been doing exercise on the Wii using the EA Active system and it's working well. I've ordered the second disc and the Wii Fit set including the board to keep things moving. I've lost 500g atm and expect to lose more, especially since I'm eating less as well. Actually enjoying it and I've noticed I'm finding it's easier to do the running part.

I've also booked in a session with a hypnotherapist to try and sort out my spending problem, downside of course is it costs $100 per session and I'll need 3 or 4 sessions. However if it works (no guarantees), it'll save us a heck of a lot more than that!
Posted by Rachelle at 6:50 PM 0 comments

Just finished updating it and I have 253 types of yarn, 106464.8m and that's only the ones which I know the metreage on.  There's a whole lot I don't know how much is in a ball so that just makes it worse.   I have way too much vintage purls sock too, lol!
At least I can work out now if I have the right yarn for certain projects which is nice.
Posted by Rachelle at 9:52 PM 4 comments 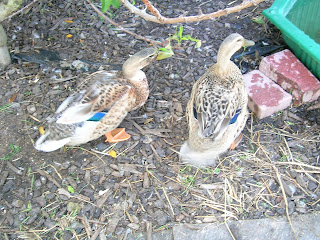 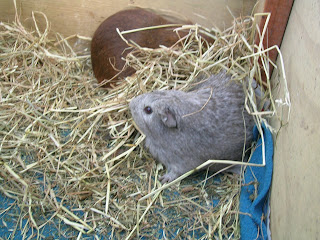 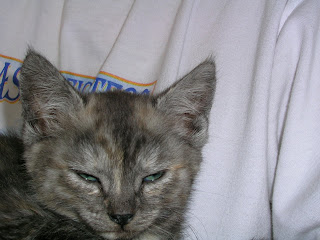 Our menagerie from top to bottom.  Left is Jay (drake), right Sam (hen), next down is Sonic (grey) and Chris (brown) the guinea pigs and bottom is Smokey (female kitten).

Smokey arrived today, no charge till Friday when the vet gives her the first lot of shots, worms and flea treats her. That's going to be $93.50! She's 8 weeks old and will get fixed at 3 months.  We won't be contributing to the kitten problem in Christchurch, no matter how tempting a litter may be.  I got her for DH, but it wasn't a surprise like I planned cos his sister had asked him if he wanted a kitten and he assumed I'd got one through her (was actually a friend of their brother who had kittens).   I had already organised Smokey from Carolyn's daughter (Katriana on TNN).   When she arrived she was shivering through fright I presume, but I think she's starting to adjust.
Ian wants her to sleep in with him, he's insisting she go to bed.  He's getting quite vociferous about it.  Smokey has taken refuge on DH's shoulder temporarily.  He'll get her on his bed when she's old and big enough to cope and when she's fully house trained.  She has used the litter box once for a wee which was good.

She's very cute, it's a bit harder with Ian's refusal to understand her need for space, tomorrow will be interesting, I can see time out coming up if he won't leave her alone.
Posted by Rachelle at 6:21 PM 0 comments

We picked up a new baby boy guinea pig today.   I think this one could be considered a rescue piggie too.   His undercarriage was soggy and mucky though he looked healthy enough.  She did say he'd been in with 6 other piggies in a small space and even with cleaning twice a day she couldn't keep them clean.   Poor thing doesn't know what to do in a decent size cage.  We introduced them in a neutral place as suggested on a piggie forum and aside from some mounting all was fine.   They're now outside in the cage and the cage has been reinforced so the local cats can't get to them (I hope).   Will go out in the morning and hope that Sonic (the newbie) has settled in and is eating and drinking well.   The whole cage is currently covered to stop the rain getting in, but still plenty of room for air movement.

On another pet-based note, DH is getting a special surprise tomorrow.   Another small furry animal will join the Crosbie clan, a wee girl kitten.  I think I'll let Ian name this one and we can present Thomas with his new pet.  My dog will have to wait, after all this expense with new animals we can't afford to get a dog as well.   The kitten will need fixing yet as we don't want kittens.
Posted by Rachelle at 7:31 PM 0 comments

Our grey agouti guinea pig died this morning.  DH thinks a cat managed to get a paw in a gap in the cage that I hadn't noticed.  He was barely nicked, but must have died from shock poor lad.  He's been buried with full honours and now we need to find another to go with his brother Chris.  They don't cope well alone so we'll have to see if we can find a baby to introduce and bond in a neutral spot.
It's really sad, he was a rescue guinea pig and the idea was for him to have a new and happy life with us, not a short and frightening one.  I didn't even get a photo of him :(.   One odd thing, next to the wound on his neck I found a sort of worm like thing with a pointy end and a blunt end which had obviously been having a good feed as it was full of blood.
Not really a good day, I also lost one of my brolly pads for the boys beds.  It must have blown off the line in the sudden gale we had and gone sailing off like a kite.   So only 2 left for the 2 boys and we can't afford to get more atm.   They're not cheap!
Also spent the day stacking wood for the winter, that's another reason we can't afford more brolly sheets, $500 for the winters wood kind of puts a crimp on things.
Posted by Rachelle at 9:41 PM 0 comments

We actually went into the SPCA for a kitten, but they were out, going back on Wednesday for another go at that.  We were planning GP's anyway, but babies not adults.  They had no puppies either.    They were very glad that we took the GP's, everyone takes the rabbits, but GP's are easier in some ways.  They don't climb or dig so we don't have to use mesh on the bottom which is good.2 boys according to the SPCA; George has named them Chris (I keep thinking Crisp) and Shadow.  Chris is brown and Shadow is a grey agouti.    Apparently they are rescue GP's and had rather a bad start in life.  They're currently out in the ducks old house with a board on the bottom of the living area so they don't get the damp rising while sleeping and lots of straw for warmth.
I think when we get our kitten we can call our place the menagerie  :lol:
No hay yet as neither of the feed places I visited were open so had to go to the supermarket.   On Monday I'll be able to get hay which is a staple in their diet, getting low on duck feed too so more than one reason to go.
Will try and take photo's tomorrow, they're currently in their run covered in an old curtain so they can get some calming rest time.   It's been a very exciting day for them, including an unscheduled run in our lounge when Ian tipped them out (I was gettting their run fixed up).
Posted by Rachelle at 8:13 PM 0 comments 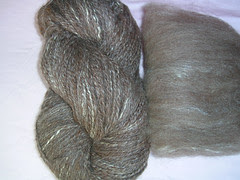 alpaca-silk
Originally uploaded by sewsable
I finished this vision of softness on Friday evening, it's 606m of baby alpaca with a touch of silk; I'm hoping it'll work for a whisper cardigan. I've more to spin yet, but I'll check the pattern shortly, I really want to make it from my handspun and this just seems the right yarn if it's the right weight. I think they use laceweight, but I'm pretty sure it's used doubled which would work out about sport weight; which is what this is.
Wish me luck!
Posted by Rachelle at 7:34 PM 0 comments