In New Zealand on Labour Weekend it is traditional to spend time in the garden and that's what we've been doing.   Admittedly I didn't get so much done yesterday as I was at the guild (wearing my eighteenth century garb, no less!), but I did get some weeding done in the afternoon.

Today though we'd originally expected to be stuck inside as the original weather forecast was pretty awful, but they changed it and it's been lovely!    As a result after me getting over an IBS attack (probably brought on by antibiotics for an ear infection) we went to Oderings Garden Centre and spent more than I wanted to on plants.   It was a good haul though, we got tomatoes, potatoes, asparagus, strawberries, beans, bok choy and marigolds.   They're now all in aside from the tomatoes which I think need to be a little bigger before being planted.   The boys chose most of the plants and then helped plant them


We put in extra asparagus as the original one was able to be harvested for the first time this year and it was so much nicer than the shop bought ones!    Unfortunately it didn't produce enough, so in 3 years we should get a much bigger crop when the new crowns are ready.
Next weekend we'll clear out the old sandpit of weeds and the tomatoes will likely go in there.

No weaving so far this weekend, but I'm hopeful for tomorrow.   It's been making my RSI worse, so have given  my arms a break from it and have been doing some arm strengthening exercises and stretches to hopefully help them recover.  I'm not far off finishing the scarf though, so hopefully I'll get it finished this week; eldest now wants to learn too, but I think I'll have to find a smaller loom to help him with that.
On the knitting front my test knit is growing.  I've done 6 repeats of the second chart and it's looking good.
My travel knitting has grown as well, I'm about to start the heel flap
In my other knitting I am about 2 rows off finishing the raglan increases for my jersey and I'm about 2 rows into the colourwork for my socks that need me to concentrate.   I've put a couple of projects on hold as I know I won't get anything done on them while the above projects are active.  Finally my Pi Shawl is not on hold, but not overly active either; I'm halfway through the first chart.   One of the ladies who started when I did has finished and I suspect all the rest are much further through than I am, I'll get there though!

I also need to start doing some sewing for the boys and me, but not till I've got a little more time.   Hopefully George might be interested in that too, I do have 2 sewing machines after all, and he enjoys it at school.

Finally on spinning.  I've got the first bobbin of my grey perendale finished and am over halfway through the second; they're for my eighteenth century stockings.   After that's done I've got a SAL for Artemis Fibres and I've got the coloured romney to finish as well.   Maybe then I'll do something from Heavenly Wools or something else in the stash.

Posted by Rachelle at 5:09 PM 3 comments 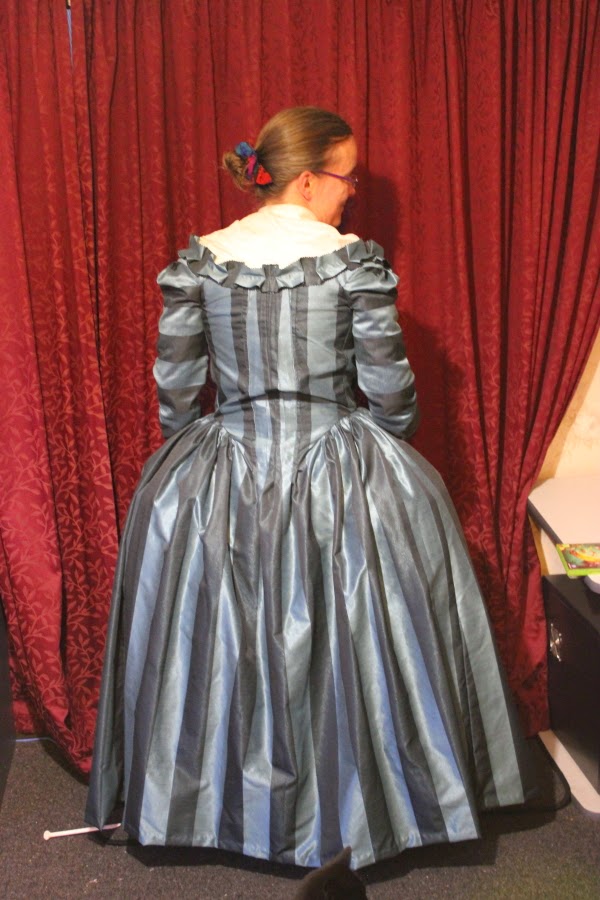 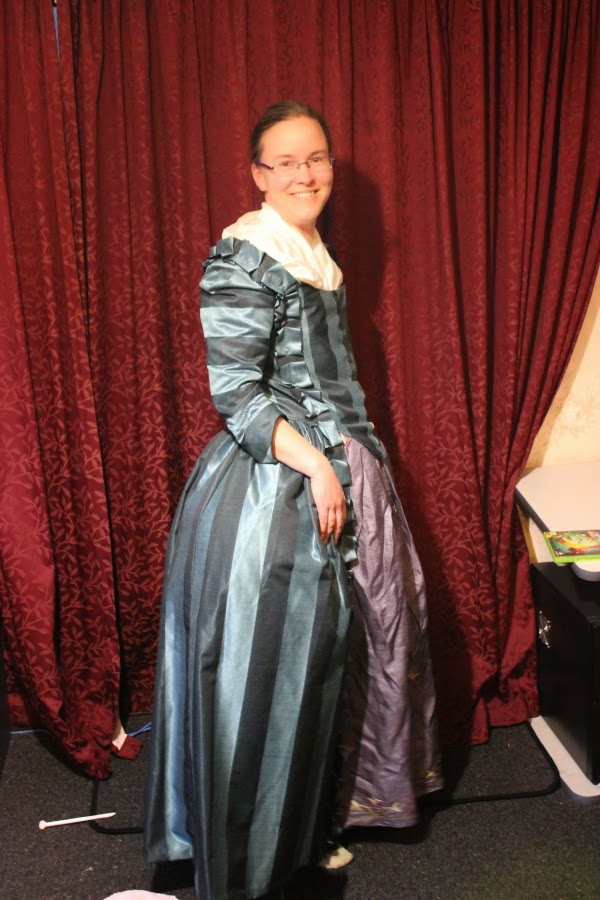 I am now all garbed for the eighteenth century; there are some fit issues; the centre bodice is a bit long and the shoulders are too wide so I will need to do some adjustments for the next one.   The sleeve looks a little odd due to that problem so I'll pop out shortly and get Thomas to pin some darts in place; I'm pretty sure that fit adjustments would be standard for any gown even back then.  After all not all gowns would have been made by experts; mine certainly wasn't!

I'll endeavor to fix the worst of the fit issues this week; probably tomorrow.   It could also do with some boning in the front as well, apparently the original didn't have it, but I need it!

Oh, ignore the hair, they definitely didn't have scrunchies then!

The Challenge:  TerminologyFabric:  Polyester curtaining - the weave is right, but the content is most definitely not!Pattern:   Janet Arnold polonaise 1770-1780Year: 1775 approximatelyNotions:  thread, hooks and eyesHow historically accurate is it?    The pattern is, but the fabric isn't.   Sewing is a mix of machine and hand; so I'm saying about 50%Hours to complete:  A lot, and more to come to change the fit a bit.First worn:   for the photoshoot, planning on wearing it for a school drop off if I can get help to get into it and next Saturday to the weavers and spinners guildTotal cost:  Probably somewhere around $40 all up; hard to know though.

This came under several terminology items.

Robings which is the trim that goes around the back of the neck, down the bodice and into the skirt; these are hand sewn and might be hiding one or two sins in the dress make up.

Sabot Sleeves:   The sleeves have a curve built in at the elbow to facilitate movement

Not yet sure what my next foray into historical clothing will be, but I think there will be more effort put into fitting first.
Posted by Rachelle at 8:13 PM 5 comments

That's the theme for this year's show and tell at our guild.   I was going to rehash some old yarn into something new, but after trying I've decided it's not going to work (mohair I used back in the 1980's).   Instead I've revisited my projects for this year and decided I already have something perfect! 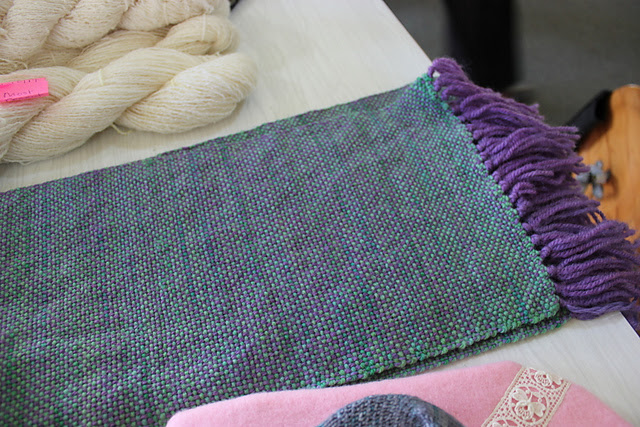 Here's my sample for the point twill I'm working on 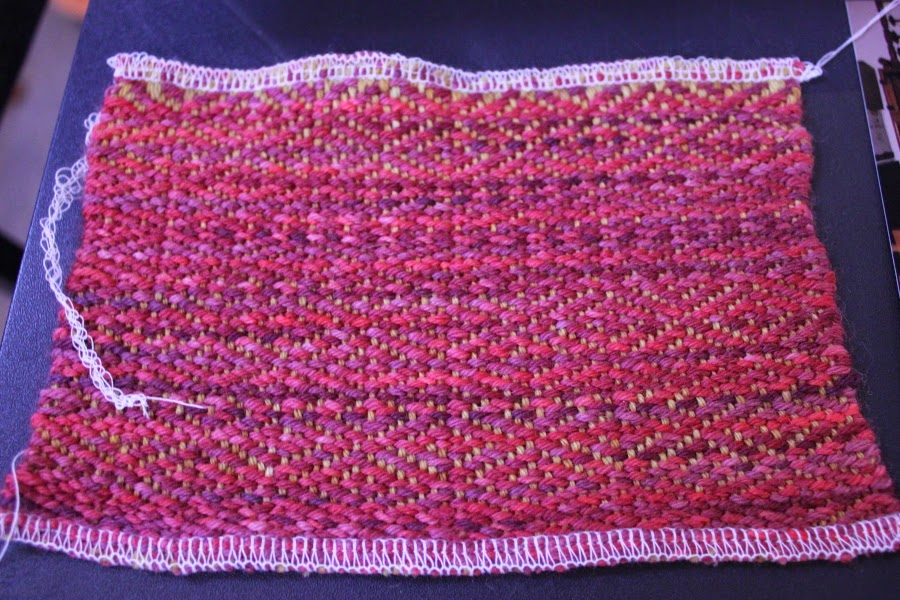 You can see I've tried a few different beat options for the weft; I think I'm going to stick to the version at the top of this picture which gives a nice finished look and a nice flexible fabric.   This will be a scarf and I suspect will be well used next year.   It will also be part of my application for the New Weavers Award, but not the main reason I'm doing it.   I'm having fun!

On the knitting front I've almost reached the armholes for my jersey.  My test knit is on hold till my large Fleegle Beader arrives; hope it's soon!   My Pi shawl hasn't moved much either, the yarn is so fine it's not the easiest knit.   My argyle look socks have the first ribbing band done, will start the colourwork soon.

Sewing has kind of stalled; school holidays are part of that, and the fact that I handsew for a living means I tend to put off stuff I have to handsew for "fun".

I've been spring cleaning though, that's kind of put the rest on go-slow and now that the inside of the house is mostly done the garden is starting to scream for attention.
Posted by Rachelle at 10:24 PM 0 comments


The Christchurch Guild of Weavers and Spinners is now open in new rooms at The Tannery, 11 Tanner Street.   We welcome new members and visitors who are interested in any of the fibre crafts, including knitting and crocheting, in addition to spinning and weaving. We meet on Mondays, and Saturdays from 10am-2pm, and on Tuesdays from 5.30-7.30pm. Beginner spinning classes are starting on Thurs, 16 Oct, and Sat., 1 Nov, both from 10am-Noon and running for 6 weeks.

If any of my readers are in Christchurch, do come along; we'd love to see you!
Posted by Rachelle at 11:30 AM 0 comments