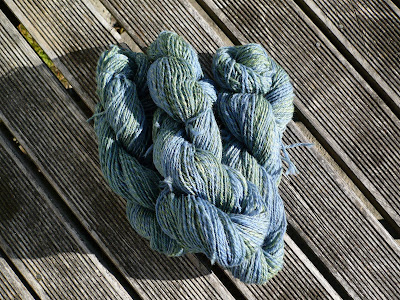 Now that it's spring I've been sorting things out.  The conservatory is now tidy for the first time in ages; we have a lot less toys and I've started going through my fabric stash.   There's a mountain on one of the lounge chairs of stuff I'm never going to use, which I'll be putting on the trading post of TNN to see if someone else wants it.   I'm hoping I can sell most of it locally as I hate posting things like that.  There's microfleece, polarfleece, denim, suiting and all sorts in that pile.
Posted by Rachelle at 4:55 PM 0 comments

Very busy this week, working frantically as I won't be home to get anything done this weekend.   So I'm doing my work for WEFT, cleaned out the car and been making Alpaca/Silk batts to spin up while I'm there.   This stuff is so fine my drumcarder isn't really coping as well as I'd like; I'm dreaming of a Pat Green Supercard, but that's never going to happen.  They're not even available over here!
I've been doing some work on my Aoelian too, I'm on the second Yucca pattern and I'm really liking it, she's going with me to Glentui as well as my socks as I need something easy as well.    I'm also taking my current spinning which is the Dorset/Columbia fibre that I dyed and am spinning for socks.   I'll also take some pencil roving that I dyed myself, it's a Merino Acrylic blend which I've never come across before, not sure how it'll wear, but I'm hoping it'll do nice socks.   I'm also taking the batts I'm blending atm; that should be plenty I think.   I'll take a book; Animal, Vegetable, Miracle.  I've read it before and enjoyed it, but it's not something that will override my spinning mojo.
Gotta get back to work now, Ian's on the computer after having a lot of time drowning the sandpit and being good at school; he's earned this :)
Posted by Rachelle at 2:31 PM 0 comments

Knitting and spinning and Autism

Well, I sent off the yarn for the painting themed yarn swap on TNN this morning, have just realised I forgot to take a photo before sending it; duh!   Went to do some work on the shawl I have just started and found that the new needles have a raised bit which is catching on the yarn; luckily Morag at Vintage Purls is putting a replacement set in the post but it still means I can't work on it today.
I've finished the first swatch for my Paloma top, it's dried and is just hanging lightly weighted so I can see if I get gauge.   If I do then I'll cast on for that tonight after I've got some work done.  I'm using Elann Lara in the most amazing turquoise.   Should look fantastic when it's done, assuming I do it correctly of course.
Mum's only got a wee way to go on George's jumper too, so he should have that for next winter no problems, though she's just caught a nasty bug and can't get up today.
I'm going to be working on some sock yarn on the weekend, try and get my first 3 ply set up.  Technically it's not the first, that was my Merino/Yak/Silk blend, but this is the first I've dyed and spun from scratch.  One ply is finished, 2 to go.

Had another meeting with Ian's school and GSE (group special education), no more hours yet as he has no time when he is independent so we're still only getting the time that they have a one-on-one person funded for.   So still only 3 hours, next meeting isn't until the 4th week of next term so if we do get extra time it'll be for 6 weeks max before the Christmas holidays.  We're working on getting him a bit more independent at home in the hopes that it will translate into the same thing at school.   They were also doing the application for funding for next year.   It's kind of scary, the max any child can get is 17 hours a week; Ian needs full time support and he's able bodied.   What must it be like for children who can get that 17 hours but are not able to do anything for themselves?
Posted by Rachelle at 2:51 PM 0 comments

Interesting times as Terry Pratchett would say. Our PC is effectively now new, it has a new motherboard and CPU plus an extra gig RAM, apparently it wasn't uncommon for the particular motherboard we originally had to cause freezing. We'd already replaced the power supply so there's not much left of the original PC aside from the DVD recorder, case and hard drive. She's definitely faster than she was which is good.
Also been doing more knitting, got to contact Patons about the Inca yarn I'm currently using as there's quite a long bit I can't use as it wasn't spun properly; one bit way too thin and further down is way too thick!
Ian's at school now, 3 hours a day. Had a period of time where the school weren't communicating very well, possibly some fault on our side too but I can't see it myself. He's settling in reasonably well, but has had several days off sick; including today. DH is home looking after us as I'm feeling rotten and the boys have been off school to recover. We have our next meeting on Monday after school and we're really hoping that we get some more time, even if it's only the half hour till lunchtime up till next term. Next term he gets a wee bit more funding so extra hours will be easier.
Spinning up a storm as well, just finished the yarn for the latest TNN yarn swap, no photo's atm as I don't want to spoil the surprise. I carded the fibre first and I'm pretty happy with how it's turned out. It's somewhere between a DK and Worsted; a trifle thicker than I wanted, but the blend of down sheep fibres pretty much guaranteed a yarn with a little bloom.

In a couple of weeks I'm going to Glentui for the weekend, it's a weekend of spinning with like-minded people from the various Christchurch guilds, really looking forward to it; especially now that I have a sleeping bag. Speaking of that the spending has gone off slightly with DH's bonus. We now have a new BBQ and a few extra bits coming for it, including a BBQ cover and grill thingie.

Will come back when I'm feeling more with it and update properly.
Posted by Rachelle at 3:48 PM 0 comments