First up is the next Historic Sew Monthly Challenge, then there's spinning and knitting and some weaving prep 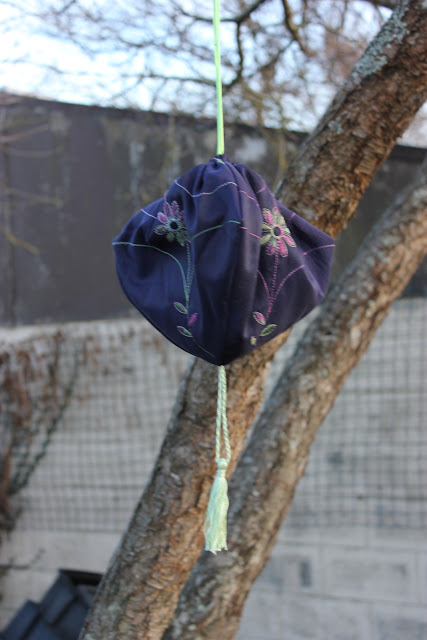 What the item is:
An 1810's Reticule (or bag) Fabric:
about as incorrect as you can get.  The outer is a machine embroidered poly-silk.  The inner is a quilting cotton.   However in the case of the outer it was fabric I had no clue what to do with (why did I even buy it?) and this was a way to remove it from stash without feeling guilty. Pattern:
Free reticule pattern is what I used, really happy with it too, it came out just how I envisioned it. Year:
Approximately 1810 to go with my dress Notions:
Polyester thread (I said it wasn't historically accurate, remember?)
Cotton DMC thread to make the tassle
Rayon cording for the ties.  How historically accurate is it?
Hmm, well the pattern is probably fairly close, but it's machine sewn and the fabric....
Maybe 20%?  Hours to complete:
Probably around 2 and a few days wait for the rattail rayon cording. First worn:
Not yet, it's awaiting the remaining dress layers to be made Total cost:
$8 for the Rattail cord including post; it would have been more but everything else is from very old stash.

That's it for the bag, I've also been knitting though and I've finished the first sock of a pair

I've been spinning too:
I've also started winding warp for my next project, this is the brushed mohair and it's not that easy to deal with so I've got 2 crosses which will hopefully help when it comes time to get the beast on the loom.
I've also done a little shopping at The Fabric Store in their sale today
I'm hoping to get more plying done this week as well as some more warping and knitting, will see how it pans out though, have to ring a few places about various things, including an appointment with a specialist (not looking forward to that bill!) to get results from some recent tests I've had done.
Posted by Rachelle at 6:20 PM 0 comments

Challenge #6: Out of Your Comfort Zone

What the item is (and why it was out of your comfort zone):

This is an 1810's dress using the Laughing Moon pattern, it's my first Regency style dress, and only the second thing from that era.  The first was the stays which had to happen before the dress.

The fabric is a silk/cotton blend, very lightweight sourced from The Fabric Shop in The Tannery in Christchurch.  It's a very fine stripe and feels gorgeous!   I'd say it's very close to a voile weightwise.
I also used some calico as we call it here for the bodice lining; I believe in the US it's called muslin, in any case it's a lightish weight unbleached cotton with a very close weave and works well for linings.


How historically accurate is it?

I'd say about 80%, the fabric is pretty close and there's a fair bit of handsewing, but the main seams are machine sewn and there's some zigzag to keep the fraying under control.   The pattern is based on extant garments as well.

No clue on this, but it should have been the blue challenge near the beginning of the year; took longer than planned due to health challenges though.

Not worn yet, but will be when the weather warms up and I've made the bodiced petticoat and shift that will fit under it.  Fort the moment you'll have to put up with Bonnie modelling it.

Hmm, I think about $100, I got the fabric on special but had to pay full price for the silk thread and of course the bits of tape.   Well worth it though, even though I love the 18th century styles, this has a simplicity that is just beautiful.

It is now demanding I get on with the rest of the underpinnings and of course the accessories and spencer!

Posted by Rachelle at 4:35 PM 0 comments

It's been a while

I've been busy spinning and planning for weaving and sewing and knitting, but not a huge amount to show for it as yet.   This weekend was mostly spent at CanAmJu's rooms helping with clean up and painting.  One of those things that meant I got only some spinnng done at guild, but nothing the rest of the weekend.   It did look a lot better once we were done though and the office is much clearer as well as two walls now being clean and painted.   We ran out of time for the rest unfortunately and my neck is slightly out again as a result of all that prep and paint work; worth it though.

On the sewing front I'm getting close to finishing the 1810 dress, just the ties and the hems to go now, but tis school holidays so my time is limited.  Might get some done tomorrow after the dentist though as the boys Grandma is taking them for the day for me, or at least for the time I'm at the dentist up till she gets fed up with them.  Youngest is being a bit hard work at the moment, so not sure how long I'll get.

On the knitting front I've finished a very warm cowl using handspun
I'm also working on a pair of socks for me (well, 2 actually, but the second isn't far through)
My main pair is a DK pair for keeping me warm
I'm really liking these, love the change in stripe width; the second sock will have the colours reversed which is such fun!
My other current socks are my travel pair which are being knit in the yarn Mum bought for me in Wales
I've got other things on the needles, but they're all on hold while I finish the socks, supposed to be taking part in a KAL for Truly Myrtle, but I think I may be overcommitted so this may not happen.  I could cast on tonight though, it's for a hat and I could do with another warm hat; what do you think?

On the spinning side of things I'm taking part in the Tour de Fleece which started on Saturday, here is my planned spinning stash:
I've already done some of the Perendale
Just before TdF started I also finished this polwarth/silk from Artemis Fibers
On the weaving front I've not actually started warping up yet, but I have done the plan for my mohair rug.   Had to make some changes as my loom isn't quite wide enough for my original plan, but it should still work out well.   I'm certainly not going to dry to make a double width on this warp, brushed mohair is going to be interesting enough without throwing learning double weave at it too.

Best be off and finish this spinning, preferably before the chimney cleaner arrives.   There is also of course washing to get in and cleaning to ignore as well.
Posted by Rachelle at 2:51 PM 0 comments