The question mark is because it might just be coincidence, I won't know for certain for a few more days.

On the 7th of this month I started taking Metagenics Parex, shortly afterwards I started feeling short of breath and noticing I was chest breathing again.  Now it's possible this was happening before and I'm just remembering incorrectly but I know it was Saturday last week when I was getting the shoulder blade pain and I remember lying to say I was fine when I was feeling breathless; why I didn't immediately connect that with the new regime I don't know.   Last night I started making some connections and this morning I did some research.  I didn't find anything on breathing as a side effect from Parex, but when I looked up the individual ingredients I found that Pomegranate skin extract can cause breathing difficulties as a side effect. 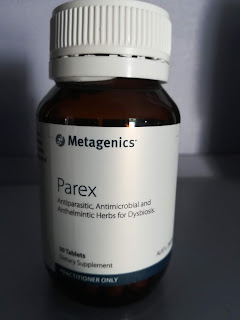 So today I'm not taking it and have put it away, and hopefully this'll mean that tomorrow I'll be breathing easier and can retrain to stomach breathing more easily.  At the moment it feels like my diaphragm is tight and can't expand fully.  I'm hoping this is the cause, sure it'll mean I can't take it to fix my middle, but in the scheme of things breathing is a slightly higher priority to me.  If this doesn't work then I'll be heading to the doctor (again).

Doesn't look like it was this, have been off it and NAC for well over a week now and it's not improved, if anything it's worse and we're now thinking my hiatal hernia might be a contributing factor.  Now been referred to get that looked at in the next 3 weeks, I'm hoping sooner since this is most uncomfortable!
Posted by Rachelle at 8:29 AM 0 comments