Falling off bikes is bad for you

I mean I did know that, the bruising was a dead giveaway, but it now seems that there was more damage done.  Since the bike accident I've had pain in my right side, just where the hip bone changes to fluffy bits.  I'd not thought too much of it, but it's not been improving so I trotted off to the doctors today and now have an ACC claim in for it.  Turns out I've likely got a hernia as a result of the fall straining that side and of course it would be weaker than usual after the surgery too.   I've now got to take things easy for the next 3 weeks which will get me to 6 weeks post accident and then go back for investigation if it's not fixed itself.  Worst thing is it feels best if I'm slouching, so my posture is not being helped at all!

I tried to put something on the Visa this morning (online Lotto ticket for this week) but it got declined, found out why shortly afterwards, someone had stolen the card details and the card had been stopped due to suspicious activity at 3.30am this morning.  Only thing that had gone through was $2.50, they blocked the next transaction and its siblings, just as well really, they were over $1000!
I rang one place whose transaction isn't yet showing as it's going through Paypal to let them know it might bounce and that they can contact me directly if it does so I can pay them by internet banking.  They are sending my needles anyway which is nice of them and will call me if there's a problem.

I have been very busy with my knitting and spinning while all this has been going on and have made a list of things that need sewing as well.    On the sewing list I've got winter dresses for me, school shirts and trousers for the boys, work trousers for Dh, curtains for our rooms on the garage building and a cover for a shoulder roll to go in my pillow.

I've got one more lot of yarn on the way, but I won this one from the Made In Home blog, I chose Socks Yeah in the Iolite colourway as my prize; can't wait till it arrives, so pretty!  It helps make me feel better when I win yarn.
Posted by Rachelle at 11:39 AM 1 comments

The idea with this challenge was to make something either for a member of the opposite sex, or something for yourself that was inspired by clothing for the opposite sex.  An example of that latter would be a riding habit with military inspired trim.   I had originally intended to make myself something, but with George needing the cowboy outfit I decided to make him a vest in the style that was worn in 1870ish.

What the item is:  A lined leather cowboy vestThe Challenge:  Gender BenderFabric/Materials:  Leather from stash and a very incorrect piece of polyester for the lining and backPattern:  Burda 9812 altered to be more period correct (removing darts for a start)Year:  Somewhere in the late 1870's to 1880'sNotions:   threadHow historically accurate is it?  From what I've seen the pattern probably isn't far off, George didn't want it to fasten or to have the faux pockets which may mean it's less accurate than it could be.Hours to complete:  Probably about 6 hours to cut and sew, another 2 to trace and adapt the pattern.First worn:  Will be worn next weekend at Scout camp along with the chaps I made last week.Total cost:  The lining fabric is ancient and the leather was the third of a set of 3 skins that cost me around $20, so probably around $10 total?

So that's my next Historical Sew Monthly item finished, the next one is May's holes challenge.

I'm working on my Sock Madness starting pair, needs to be finished by midnight on the 14th (not NZ time, so I have longer) and I'm less than 40 rows off being done at this point, hoping to get close to finished tonight
Once the socks are finished I'll get the shawl Missandei finished, I'm over halfway through the knitted on border so it shouldn't take long.
On the recovery front I went backwards slightly due to overdoing things (I don't learn apparently) so have taken some time out from exercise to let things improve again.  I'll start biking again this week, 5k rides for the week and then work up again.
Posted by Rachelle at 8:04 PM 3 comments

What the item is:
A pair of leather chaps for horse riding through the bush like American cowboys wear from the 1870's to 1890's which is when this particular style was popular
The Challenge: Protection.
Fabric/Materials: 2 lambskin skins, real ones would be made from cowhide but lamb is what I had in stash and eldest won't actually be doing rough stuff in them, it's a costume for Scouts camp.
Pattern: drafted by me
Year: 1870 ish.
Notions: Polyester thread
How historically accurate is it?
Hard to know, I had to approximate a pattern from images on the net and I think many were fastened rather than sewn but I couldn't get a good enough look at them so went with sewing.
Hours to complete: Probably about 4 hours
First worn: Will be worn 3rd weekend of this month for the last night at Scout camp, costume is required and the theme is cowboys this time.
Total cost: I think I paid about $20 for the skins on Trademe, they certainly aren't great quality but for the job at hand they did fine. 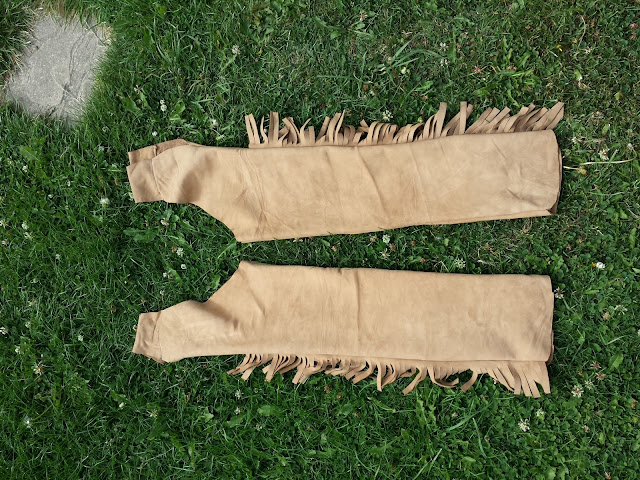 Posted by Rachelle at 4:37 PM 1 comments