Funny how you get so much less done in the holidays.   The boys do have the Autism Society 3 days this week, but there's still work to do, housework, doing things with them on other days etc.

Yesterday we went ice skating, unfortunately I didn't get many decent photo's as I took the smallest camera which hasn't been used for a while and the batteries died.
We all had an amazing time!   Both boys were skating away from the walls until the direction changed, at which point they went back to the walls for a bit.   George's second ever session, Ian's first though so I was really impressed.   Thomas and I each got a few goes around with no child clinging on; I'm seriously considering trying it a few times in term for fitness and seeing if I enjoy it as much when it's just me.

I've finished Ian's first sock, but forgot to take a photo so you'll have to wait for that.

I have however taken a photo of my stays at the current point of construction.   They're covered and lined now, I stitched near the edge of the fabric to catch all layers, next step is to cut in the bottom to make the tabs and then I can bind them.  I'll be using a chamois, thanks to a suggestion made in the comments of one of The Dreamstress' blog posts.  Luckily I have one which hasn't been used because I can't find my maroon leather offcuts.   The chamois colour works well with the cover fabric which is good.
Once the tabs are done I then need to do the eyelets, make my cording (waiting on a lucet to arrive) and then hopefully the shoulder straps to finish it.  I'm considering putting a narrow band of chamois on the diagonal front side seam to put a visual barrier between my patterns.

Posted by Rachelle at 8:16 PM 2 comments

2nd to last day today and I've finished 5 skeins so far and got started on my final lot of fibre tonight.

I've got 1" to go on Ian's first sock, hope to get that finished in the next couple of days, 3 rows of finishing the second sheep on the cushion cover which means I'm now slightly over halfway.   Having some issues with my ulna nerve I think it is in my right hand so am being careful.   Might have to pay a visit to the chiropractor.

I've got the base finished on my stays and cut out the cover and lining fabrics.   Still need to trim the bones too.

In other news I've done a little spending in the last week.   I won a $20 voucher for the Make Cafe from the Matariki winter craft thing so spent that on this:

I've also got a little fabric coming from the US suitable for a dress and some Noro Kureyon Sock which is now discontinued and I really wanted a little more cos I love the stuff!   Photo's will be posted when they arrive.    That is it for a while though, can't afford to spend more, especially as the garage has run into another hitch with the council and we now need a surveyor to prove it's the requisite amount above the datum line (we are hoping it is anyway).  Wish us luck on that one, it's causing another 2 week delay, but hopefully that's the final delay.    The driveway has been assessed and we'll be overseeing that work once the garage is up, no point before then cos we don't want it ruined by lots of trucks.
Posted by Rachelle at 8:48 PM 0 comments

Working on my stays


I've still got some boning to do on the front part, diagonals and some horizontals.   All the boning in it so far is plastic cable ties.    Once that's all done then I'll be hand-sewing on the cover fabric and possibly a lining, doing the eyelets (by hand), binding it around the edges and then it'll be done.   This may take some time yet, certainly have missed the deadline for the project which was yesterday, but I'm not going to rush it.

I went to Fabric Vision today for twill tape for the next project which is the panniers.   I did get it, but also came home with 5m of wool blend plaid fabric in charcoal and maroon and 2m of a good solid cotton duck which will be a better base for future corsets.
Posted by Rachelle at 8:33 PM 0 comments

I'll have to do some plying soon, I've only got 3 good bobbins left, or possibly 2.   My other 2 bobbins need some work as they stick a little on the shaft.

I've cut out one layer of my 1770's stays to sew together and see how they'll fit.   I've got 1" seam allowances to play with though so can add some if needed.   Once I get the fit sorted I'll be making them with
They will be for the Eastern Influence challenge.  The fabric is very similar to some examples I found on Leimomi's (The Dreamstress) Pinterest page for this challenge.   I think it's called Chinoserie.   After this is the White Challenge and I'm planning on using an old white linen sheet to make myself a set of panniers.   Then for the next challenge which is Separates I'll make the underskirt and for Robes and Robings I'll be making the bodice and overskirt which has robings as part of it if I understand the definition correctly.    The corset needs to be finished on Monday so I need to get a wriggle on, but not till tomorrow as the sewing machine is too noisy.
Posted by Rachelle at 9:46 PM 0 comments

At least it is for Thomas, the boys have a ball! 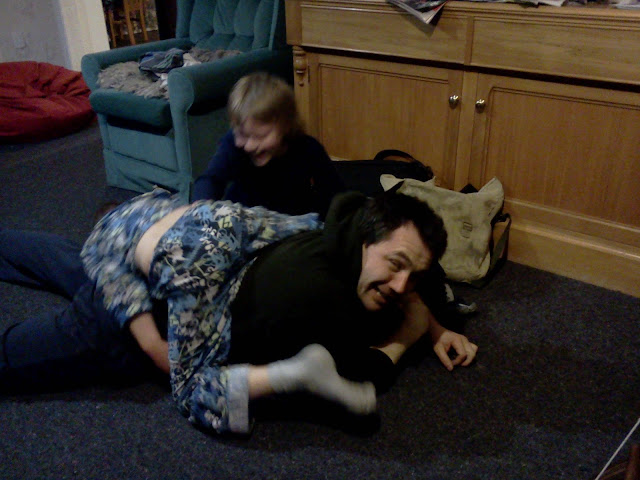 Posted by Rachelle at 7:53 PM 2 comments

Posted by Rachelle at 8:14 PM 2 comments


Tomorrow I hope to mow the lawn (jungle) and tidy the kitchen bench (tip).  Also the new bench tile should be going in first thing and then our repairs (garage and section aside) are complete!
Today I did 8 loads of washing, 8!   I couldn't hang the last load off as the line was chocka.

Driveway is being assessed on Monday, will be interesting to see what they have to say about the landscape out there.
Garage consent is at the council, considering the situation there I'm not holding my breath, even should they approve it quickly who's to know if that approval actually holds water?
Posted by Rachelle at 4:40 PM 1 comments