I finished my Aeolian shawl at the guild this afternoon so this is basically a brag post.   It's gorgeous, and that's before blocking. 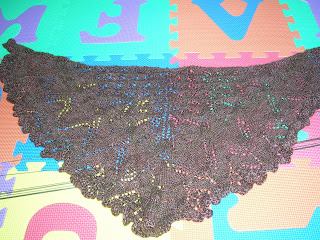 Here it is blocking! 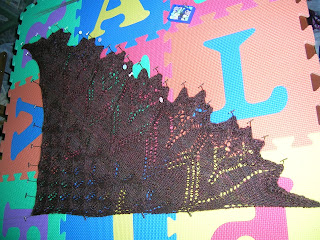 I also tried spinning linen for the first time, it's short bits and not going quite so well, got covered in it!   Will keep trying though.

Posted by Rachelle at 7:20 PM 0 comments

School Holidays and I won something!

All I can really say for that is that I'm glad it's over!   No car for the first week aside from the Thursday so there was way too much computer and tv for the boys.   Weather wasn't great either which didn't help.
Monday this week they went to Grandma's place so I could go to the sock knitting day over in Bishopdale with the spinning guild.   I then picked Ian up and took him to his first session at the University for a course we're doing there.  He spent most of his time telling me he wanted to go home now.
Tuesday we went to Willowbank which was definitely enjoyed if rather quicker than expected.   Wednesday both boys went to Grandma's for an overnighter; bliss!   I did quite a bit of knitting, a little tidying and Thursday morning went to the Heathcote spinning guild; which I'm going to join!    Unfortunately when I picked the boys up I found out they hadn't been very good, so no TV till after 5pm yesterday as well as no Xbox and PC at all for the rest of the week.
Got a phone call yesterday morning from "The Breeze" which is a local radio station.   I'd won the ultimate girls getaway, so I've invited Joanne from my knitting group to join me for a night at a hotel, followed by a small shopping trip and a manicure.   Should be good.   Just waiting to hear back if the night I want is ok with Joanne and if so then I'll ring and hopefully book it.   Has to be a weekend night.

Got a bit further on my sock, halfway through the foot of the first one now, also got partway through the first Agave chart for my Aoelian shawl, thought I'd stuffed it up for a while, but in the end it was simply my counting that was off.   Need to try and get that finished by the end of next month so I'll be taking it to the guild tomorrow instead of spinning.   Part of the reason for that though is that the weather is awful atm and I don't really want to take the wheel when it's peeing down with rain even if she does have a custom made raincoat.

Next week's going to be busy too.   Monday is fairly quiet, but I"m going to make a doctor's appointment for the following week for a general checkup.  Haven't had one ever and I need my tetanus shots updated anyway.  Tuesday I'm doing a spinning demo at school, hope it's reasonably warm as I'll be spinning raw fleece which won't be so easy if it's cold.   I'm demoing as it would have been done 100 years ago, so raw is the way to go, no drum carding and I'm not prepared to ruin my combs on raw fleece so I'm using an old flick carder.  Once that's done I can then spin the linen.    Wednesday is the first parents meeting for the course I'm doing with the University; hope I can find a park.  Thursday will be the Heathcote spinners guild again and Friday I'll start back at the gym.

From then on it's Monday and Friday at the gym, Wednesday at University and Thursday at the guild; I do hope Ian starts getting more hours at school so I have a chance to get some other stuff done!
Posted by Rachelle at 6:01 PM 0 comments