It's raining, it's pouring; we're all wet!

Weekend before last a storm front came through on the Sunday.   Started with a lot of hail which blocked up the drains, then came the downpour!   Our gutters didn't cope and normally this isn't a problem, but for some reason this time they sent the water over the interior lip of the gutter, into the overhangs and down the inside of the windows.   Had to run around frantically putting towels on window sills and unplugging electrics.   Then went outside where it was cold (been 30 deg cent before then).  Unblocked all the downpipes except one which I had to remove alltogether as it was just too blocked up.  We'll have to reattach that one to the house as the bracket was broken.
Next weekend we're taking an inch off all the bottoms of the downpipes so there's a gap between them and the grating, and we'll be installing an overflow system using poly pipe inserted into the guttering and placed a little higher than the bottom of the gutter so that it'll only let water through if the gutter fills up.

I think Sunday's are a day when important things happen, cos this Sunday just gone no downpour, but Dennis the Menace had a stroke and had to be put down.   RIP furrball. 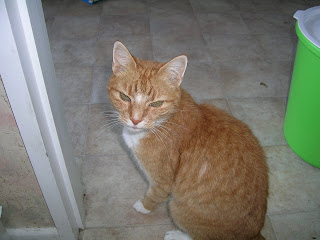 He's now in the garden permanently.  Seems strange not having to close down the laundry at night and not having to check for cat before setting the alarm when we go out.   Hoping to get a dog at some point now, wish us luck.
Still spinning and knitting.  Almost finished my second pair of socks and 3 bobbins into the 2.4kg of Romney that I"m spinning up to make myself a cardigan.  Will probably dye the fibre once it's all spun up.
Posted by Rachelle at 2:43 PM 0 comments