Allergies to more than I knew

I knew I had hayfever and that hazelnuts aren't good, but tonight I had my first drug allergic reaction.  Was prescribed Cyproterone Acetate and had the first one with dinner tonight, within an hour I had itchy throat that felt like it was swelling a bit, a cough and later tingly tongue.  Healthline had me take an antihistimine and then told me to head to ED.   Another antihistimine (and yes I told them what I'd already taken) and I started feeling better so was sent home.
I'm to watch for a rebound reaction sometime in the next few hours and head back there if that happens, otherwise back to normal and I get the stuff I'd planned to do tomorrow finished.

In other news I have a date for surgery, 7th of December is when I head in to get most of it sorted.  I need to be prepared that I'll have another surgery later as the likelihood is they won't be able to get all the endo out on first attempt, but at least they'll get the bowel and uterus sorted.
Posted by Rachelle at 8:45 PM 3 comments

First up I've handed in my notice at work, mainly due to health reasons - 10 years of bending over handsewing has taken its toll on my neck and I need to strengthen it so the chiropractor's work doesn't get stuffed each time he does it by my work.  It also means I'll be able to focus on family, health, and house until I have my operation, at which point I'll be able to focus on healing instead.


Knowing I'll have surgery during warmer weather I thought about what I had to wear and came up with zilch.   There is nothing that isn't fitting in some way, and all my bottom half stuff has waistbands.  I checked my dress patterns and they're all fitted too!   This required an online look for patterns that would fit the bill and I've got 2 that I've paid for and printed off.

I'll be making these for 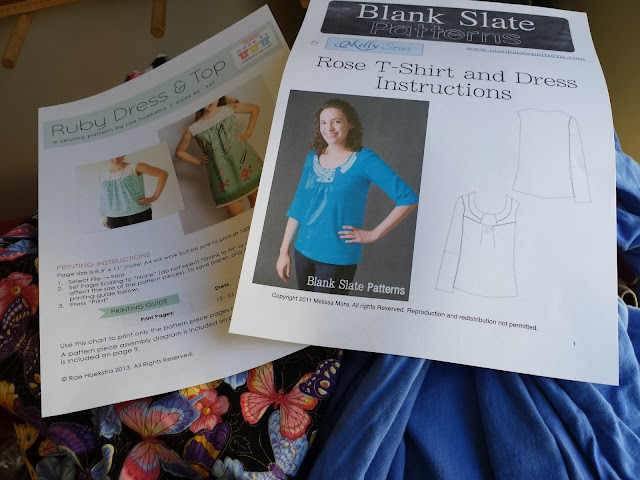 On the left we have the Ruby Dress and Top pattern which I'll be making from the butterfly fabric (there's another fabric below that, same print, cream background which I'll use for the contrast)
On the right is the Rose T-Shirt and Dress for which I'm using the royal blue knit and may use either a cream or red contrast to go with it.
If I like them I may make more, but for a start this'll do the job and is a change of direction in more than one way.  I don't normally sew stuff that's not fitted and also it's been a while since I've sewn everyday wear rather than historical outfits.  Also normally I'd think about stash and then go out and buy something, with giving up work that's also not an option.

On the knitting front I've poked a hole in my finger, but despite that have got to the waist on my Strokkur and am really looking forward to being able to wear it. 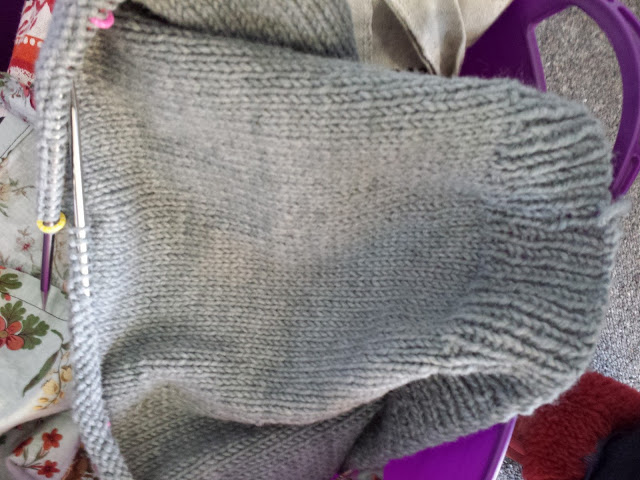 And there is yarn on the way to knit a shrug to go with my summer dresses, the final purchase for some time and only because I didn't have enough black to do anything larger than socks.
I'm planning on making a Dew Point and the yarn I'm using is some Outlaw Yarns Bohemia Sport
Posted by Rachelle at 5:23 PM 1 comments

What the item is: An approximately 1810's bodiced petticoat

The Challenge:  Sewing Secrets - to have a hidden detail or message; in my case there's a name on the ribbon: Arthur Wellesley - Duke of Wellington

The Fabric:  I used some Egyptian cotton sheeting that I bought from Haralds a while ago on special, it's lovely to work with and a very tight weave.

Pattern:  The Laughing Moon bodiced petticoat pattern - really like this pattern, only thing that wasn't quite right was the number of pleats on the back, there should have been one more.

How Historically Accurate is it?  A little less accurate than the rest of the outfit, I don't think there would have been any machine sewing, and I did 95% of it on the machine due to time constraints.  Aside from that the pattern is based on extant examples and the fabric is probably fairly similar too.
I'm going with 70%

Hours to Complete:  Took me a few days as it's the school holidays, but if I'd knuckled down I could probably have done it in about 12 hours; I'm not fast.

First Worn:  Currently wearing for its first outing to the Christchurch Guild of Weavers and Spinners today.

Posted by Rachelle at 9:13 AM 1 comments