Last week while Thomas was in Wellington I got an email from school asking if we'd be interested in free tickets to go to the circus on Saturday.   I said yes please as I thought it would be a nice family thing to do seeing as Daddy had been away all weekend.
It was on at 11am on Saturday morning which gave us time to go in and order our new washing machine

This is an 8kg Bosch front loading machine that spins 1600rpm (cardboard towels here we come!).  So when it arrives I should have a reliable spin, as well as a nice sized machine to replace our earthquake damaged machine.
After that was sorted we headed off to the circus.  It had been put on by Rotary, so we weren't sure what to expect; however if we'd have had to pay we would not have been disappointed.   It was a marvellous show, a little clowning, but mostly acrobatics.  Ian loved the Zim Boyz and now has a poster on his wall of them to prove it.  Some of the stuff they do like standing on eachothers shoulders without holding on Ian also does; he doesn't back flip off yet though.   There was tightrope walking, some amazing hula hoop displays (I can't keep one up, she had about 8 at one point!), the hoop thing in the air a bit like a trapeze.  Also a quick-change show, that wasn't quite as interesting for the boys.  In short a wonderful time out and not regretted at all.   The show was called Circus Quirkus.
My photo's aren't great, I didn't use the flash (not that a flash would have helped).   Unfortunately I think I was the only one who didn't use it despite a specific request at the beginning for no flash photography! 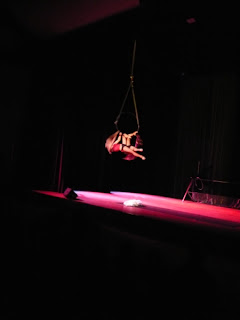 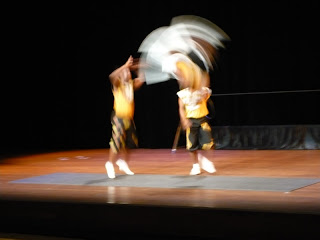 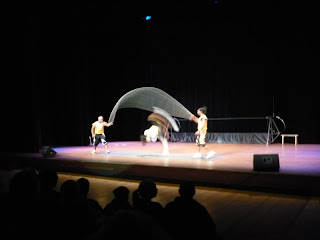 That night my parents came over to babysit the boys while we headed out to a 75th dinner for Thomas' Dad (Neil).   We went to the Gardens Restaurant in Marshands Rd.  It's a buffet which normally I dont' think much of, but in this case was really nice.   I would happily go back I think.  The most divine sticky date pud was the high point for me.

Afterwards Thomas and I drove back towards home, but stopped off for a wee walk and look at the cordons on Manchester and Colombo in the dark.   We got stopped by a police car on the way to check if I'd been drinking, luckily I hadn't been so that was fine.
I took a few photo's, once again no flash so some don't show much; but it gives you an idea of the state of some of our buildings 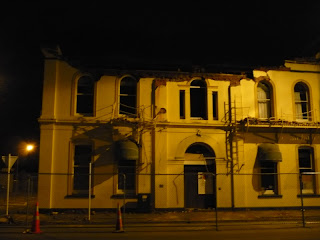 An old Hotel on Manchester St, the top of the parapet is gone on the left and cracking down the front too. 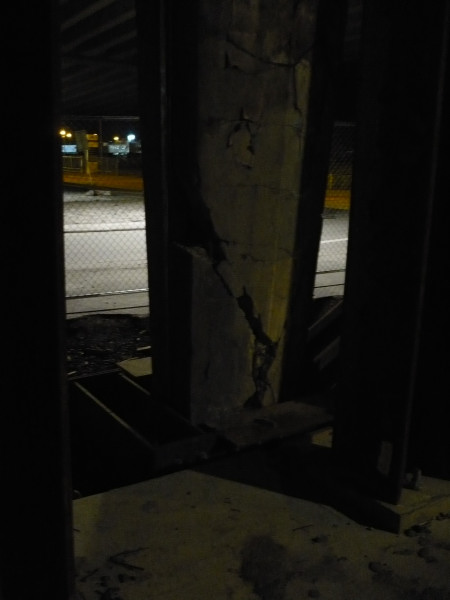 This is the Colombo St overbridge on Moorhouse.  I've got no intention of ever driving over this again!  You could hear the reverberations through the steel support structures they've got bracing this pillar every time someone drove over it; not a nice sound.
Next down is on Manchester St, this is what remains of a wee block of shops that included Darby Brothers Menswear; this is never going to open again in this building. 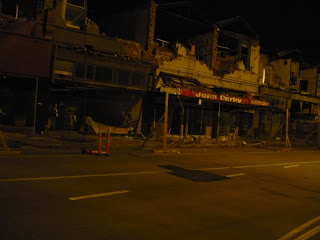 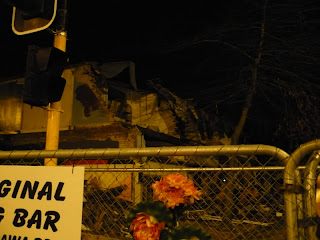 Colombo St at the cordon; you could hear thumping noises in the building on the left; we think a broken water main as there was a lot of water being directed out of the area; either that or there was someone doing something nefarious in the dark, but no torchlight or anything so we're pretty sure it was water.   We could also see the leaning hotel; no way I could get a photo of that in the dark without a telephoto lens (which would need a DSLR) and a tripod.  My point and shoot isn't up the job at all.

One thing I'm really proud of this weekend though, I finished my Spring Garden Tee!   I've tried it on and it looks good, but that was pre-blocking.   I'll post a photo of it worn post-blocking once it's dry.  Here it is drying though: 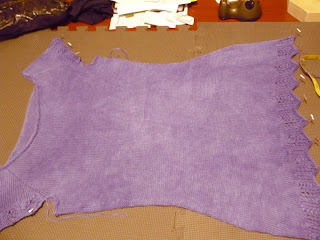 It's not quite as bright as the photo suggests, to give you some idea of how far off it is the background should be a darkish grey.   I just couldn't get the colour values to work though.   Really happy with it.

I've also got back onto George's mittens; past the top of  the skull and crossbones, thumb is attached and doing decreases now.  Might even get that finished tomorrow while I'm at my course, which will leave just one mitten to make.  It's looking really good, and my idea of knitting the thumb separately and attaching it seems to be working well on a finger-up mitten.  Much better than the provisional cast-on option did for colourwork.  I'll post a photo of it once it's finished; maybe even on a hand!
Posted by Rachelle at 4:07 PM