A wet and cold day

Today I had heaps planned.  I was going to the area day for our spinning and weaving guild; which I did.  Unfortunately I took the wrong turn-off so it took longer than normal to get out to Oxford.  When I got there it was pissing down with rain and the place was packed!  I don't do well in crowds so I forgot to take a photo.  I did say hi to a few friends from the guild (Joanne, Jan, Paula), but not many others; I got 2 lots of fibre.   1 of Merino from one of my favourite dyers (Heavenly Wools) and also some from Southern Alpacas.  I'll take photos later, but there's no natural light atm.
The one from Heavenly wools was a colourway called Dilly Dally and is a purple and green fibre; it was stuff in the specials bin, short bits etc but this is not a problem for me.
The one from Southern Alpacas is a black alpaca fibre mixed with plum and blue silk; I've got some already but wanted some more.

I'm afraid once I'd bought them I scarpered.  I really hate crowds!   Came home the right way, got some milk and a meat pie for lunch and then cleaned out the fridge.  You don't want to know some of the "best before" dates in there; expired and not by months!   I've still got to actually clean the fridge, but at least the food in there is all ok now.   Also put a few books in the recycling bin, stuff that we've never looked at and probably never would; including computer game books that are windows 95. 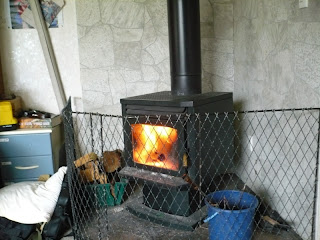 A bit more knitting, but I've got to go and get the boys soon; then it's going to be a quiet afternoon in the living area in front of this lovely thing.  I lit it with the "kindling" Thomas had left for me but had to get more wood in as he'd forgotten to do that.

I've also got quotes for the washing machine I want, looks like I'll get it for $2288 plus delivery and extra warranty (I know you're not supposed to need it, but the CGA costs more in time and stress than they charge for the warranty, believe me, I've been there).  GE have increased our limit so I can get it, just got to talk to Thomas first.   The above price is through Harvey Norman, an extra $60 for delivery and will be 12 months interest free; enough time for even EQC to get their A into G.   Kitchen Things will do it for $2299 including delivery with 6 months interest free, which should also be enough time.   I can live with the oven the way it is, but not the washing machine.
Need to find out how much K'T will charge for the extra warranty before making decisions though.
Posted by Rachelle at 2:41 PM