The last few days have seen some frantic knitting going on.  I've finished George's first mitten, but have the second to start (tomorrow I hope), I've also removed my Spring Garden Tee from the blocking table and tried it on, it's gorgeous! 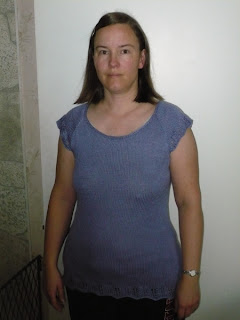 not the best photo unfortunately, we had to use the flash and the lace at the bottom isn't showing too well.  However it fits perfectly and feels really nice; looking forward to wearing it in the summer.

Tonight I finished my Citron; it's not blocked yet and I changed my mind about beading it when I found my size 8 beads weren't quite big enough and I didn't have anything suitable in size 6.   I cast off 2 rows early to get the peacock colour on the cast off, this also meant that I didn't have to knit 2 more rows of 735 odd stitches so there's not a bad side to this.   I still have 31 grams of the yarn left and no idea what I'll do with it, but I'll work that out sometime in the future; in the meantime it'll join the other leftovers in the sewing room.
Here's the finished object pre-blocking; 102cm wide.  My handspun too, only thing I didn't do was to dye the Merino top. 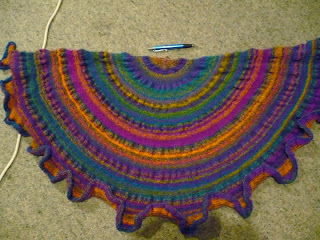 It'll get bigger once blocked, hoping to get that done tomorrow after I go to work (some urgent stuff to drop off) and also go to Mum's to go shopping for Ian's birthday present.   Can't believe he's almost 7!
He was offered three choices for his birthday.  A party involving kids from school, a family only party or going out.  He chose the family only option, "with cake please Mummy".  The plan is to do a chocolate cake with a tornado on top, hoping it goes well.  It'll be Sunday week, a morning tea which gives everyone time to cool down afterwards before the working and school week restarts the next day.
From us he's getting 5 books which I ordered last week from the book depository.   Worked out at around $30NZ which is really good, 3 on tornadoes, 1 on volcanoes and 1 on earthquakes; he should be in natural disaster heaven!
Just hoping the oven holds out, it's not a happy unit atm, but we can't afford to replace that before EQC pays out seeing as we just replaced the washing machine.   Even if EQC don't pay out in full on that, we needed to replace it as it just wasn't spinning well enough all the time (sometimes was ok, others not).  Going into winter you need a machine that spins.   We now have a good machine (see previous post for details) and it's managed to fit the duvets in and wash them properly.  Ian wet the bed the night after it arrived, just so we could test it; wasn't that nice of him?   The old one is residing in the garage for the moment, until 6 months after our claim is processed; whenever that may be.

We've also worked out we need a new lawnmower.  Our old pushmower is on its last legs, Dad rang today to tell us he could get us an almost new motor mower for a good price from his work; it had been returned due to a fault and the customer insisted on a new one; fault is fixed so we're getting it.  More space to find in the garage, and of course a slight delay on paying a bit off the revolving mortgage; but it's worth it.   It's a 4-stroke motor so no faffing around with oil mixes.  Really hope that petrol doesn't get too much higher, but considering our lawn is also often too long for the pushmower we really don't have much choice.
Posted by Rachelle at 10:22 PM