Thought you might like to see the bike that we went to so much effort to retrieve, this is Thomas' baby.  It's a Honda VT 750 cruiser styled bike and is definitely a nice bike. 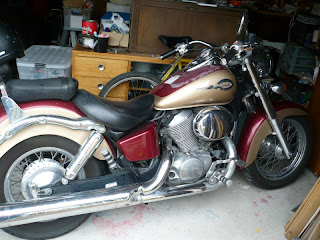 It's lost a wing-mirror  but aside from that is still in good nick, a bit of paint damage but that was mostly pre-quake; only way to keep that perfect would be to never use it which isn't an option.   It's Thomas' main transport to work which means I have the car.

I've been working on my quilt, this is how it's looking with the blocks done so far laid out: 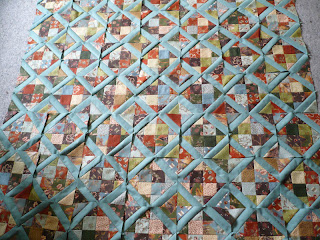 Worked out today I still need to make 90 blocks!   I had to order another jelly roll to be able to do that, will start cutting out the 2nd roll this week; may take a while to finish though as I have winter clothes to start on soon.  George has approved the material for his pyjamas (navy blue with lighter blue maple leaves), also have material for some trousers, tops and stuff for me too as I'm getting low on winter clothes.  Also need to make a couple of skirts for me too, so there's no way this quilt will be ready before this winter.

I have finished one knitting project though, my One-Sided Vest is finished as of tonight.  It still needs blocking, but fits well and feels firm over my pyjamas (that was what I was wearing when I tried it on).  Over my usual winter tops which are fitting it will be perfect. 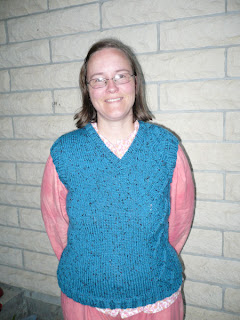 So excuse the pj's.  You can't see the cable well in the picture, but it looks good and should show better after blocking.  The pattern had 2 errors that I found, one in the cable directions (T3F and T3B were the wrong way around) and the wording in the decreases for the neckline was written in such a way as to make you decrease every 8th row, when it should be every 4th row.  I've noted my project page though so anyone looking at the pattern can find it.  Don't see any point in letting the designer know as she ignored my initial question about the cable issue; not going to waste my time again.
The yarn though I love!   It's a yarn with body, not overly soft and with a nice fleck through it made from polyester.  The main component is wool though and I'd say it's something like a Romney.  The yarn is Naturally Tussock 14 ply and it feels like it will wear well.   I love soft yarns as much as the next person, but for something like a vest I want something that will last and look good for a good amount of time and I think this fits the bill nicely.   The yarn also comes in Worsted and DK weights from memory.

I will probably cast on something new as I'd quite like a bolero style and I have some lovely Noro Silk Mountain looking for a project, this would also allow a little stash busting.

Went to a spinning day yesterday, was concentrating on my knitting, but I won in a lottery 2 beautiful lots of fibre: 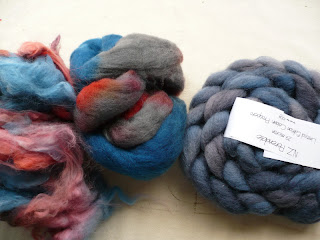 The first one I won is the one on the right, it's Vintage Purls Perendale and it turns out to blend beautifully with 100gm of Romney I have from another dyer, I'm going to ply the two together.  Both fibres are slightly stronger so should work well together, the Romney has more sheen so it should be quite special.
The second which I only won as everyone else had already won something is some Merino dyed by a lady in Oxford (I've spun her fibre before, yummy), it came with some bunny angora dyed to tone with the Merino.  I still have my current bamboo to finish before I can start on anything else, but this has bumped a few other things down the queue.

Earlier that day I got an email to say I'd won a blog competition for a book "Knitting it Old School" as well as sufficient yarn to make a mens jacket from the book as well.   I have no idea what the yarn is or what colour, but the example shown on the website is green.  Thomas took one look at it and informed me he'd never wear it, that's ok, wasn't planning on knitting that pattern for him anyway; I'm sure there'll be something suitable in the book that I can use the yarn for that I can wear.  Unfortunately my wee run of luck didn't extend to Lotto, but I can still dream.

Earthquake wise, our area is getting back to normalish.  Still boiling the water, still can't go to town as it's blocked of and tbh I doubt there's much of it left anyway.  Probably going to be 9 months or more before our house is properly assessed; I guess that gives me time to find more damage, like the dent in the boys bedroom door which I suspect is earthquake related; though I could be wrong.   A lot of people left town this weekend due to Ken Ring's prediction of another big quake; which he's since withdrawn.  His predictions have caused a lot of fear in a community that already has more than enough to deal with.  I'm taking a flower essence quake remedy which I suspect is helping.

Did a 50 minute bike ride on Thursday, felt great during it, but must have pulled something as I spent the next few days in agony with a really painful ribcage on one side.   It's much better now, but I'm still tired due to a lack of sleep for 3 nights in a row.