For some unknown reason if you spin you acquire wheels.  I started with an Ashford Traditional wheel, I upgraded it before acquiring a Little Peggy wheel.  Once I had Peggy I sold the Ashford.   Soon after that I ordered and waited for my Little Grace Special which is what I spin on now; once I had her I sold Peggy and have regretted that ever since.
I bought a Wing normandy style wheel for $20 on Trademe about a year ago, but it needs a lot of work so it's not been used.  This weekend I picked up another wheel; a Thompson Double Drive wheel.  I haven't tried her yet, but she's beautiful!   I originally organised it for a friend, but she was offered a Wing upright for half the price which is great for her.   I still went ahead with this wheel since I do need a second working wheel to teach the boys on.    She has 10 bobbins, a lazy kate and also a second whorl for thicker yarns.
In other news we have just one quote to happen for the carpet; they come on Sunday.   Waiting on the actual quotes for 2 others, but they've been and measured and at this point we're looking at dark grey berber style loop pile extra heavy duty wool.
We have the final quote for the garage too, now to get things started on getting the money and sorting the concrete pad with EQC; I'll be ringing them tomorrow, wish me luck.

I've been sewing too, I now have 4 new t-shirts


Have got further than this now, sock is past the heel turn, this is now on hold, Ian's mittens are more important. 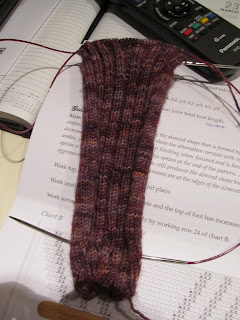 I've also finished a vest for George in my knitting 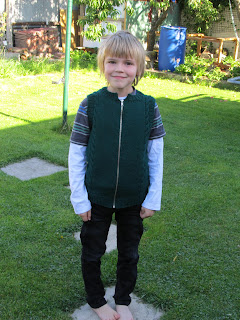