Before I get onto the review I want to say Thomas' socks are finished!   I finished them as expected during the guild meeting today which means I now have 3 projects left on the needles.  My Central Park Hoodie, Ian's On Fire jersey and my Beekeepers Quilt.  I will also cast on a baby project either today or tomorrow, still deciding which pattern. I"m leaning towards the Baby Surprise Jacket as the yarn is handspun and that pattern seems to work well with handspun.
Without further ado, the socks: 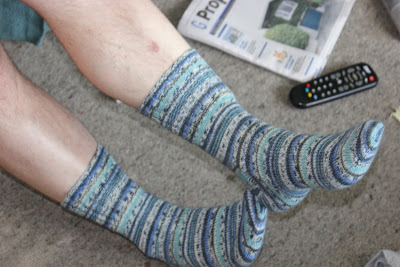 While I was at the guild a bunch of fabric came in that had been donated; I took some home including some lovely wool blanketing and a flecked wool suiting plus some Vonella (not wool, but still lovely).   It needs a wash as it has the slight tang of mothballs to it, but I'm glad I got it.  There was even some corduroy; I love that stuff!

Interweave Knits 2011 Winter Edition:
I'm finding this particular edition rather appealing due to the vintage feel of several of the pieces; now with my vintage style starting to be found this sort of thing is really nice to see.  I will tackle a vintage pattern at some point, but not sure I'm quite ready just yet.   Admittedly there are patterns I want to knit that aren't particularly vintage (Central Park Hoodie as an example), but I'm not going to be rabid about it, if I like something and it'll work in my wardrobe then if it's not vintage styled I'll still make it.
Interweave Knits preview

Bettie's Pullover
This is one of the vintage styled pieces that make me love this edition.  It's got the fit of the thirties and forties, but not the high neckline that came with those eras.   Looks like it's got quite a high armhole though which is more like the time it's based on.  I love the lace on the body and I even quite like the wee collar detail.  Not sure on the styling though, leggings on a vintage styled piece?  Bloomers would have been better.

Pan Am Jacket
Something about this says 1920's to me, it doesn't say what era it's based on, that's just the feel I have from it.  I personally don't have the ideal figure for this particular era, a wee bit too much hip and bust; on me this wee jacket would spread too much a the front and just wouldn't look right.  I personally think it needs a little more length.   Not something I'd wear, but I can see it on anyone less than a B cup who also has boyish hips.

Tweed Pillow and Seed Pillow
I've never really been tempted to knit a cushion cover, and to be honest I'm still not.  It might be a good way to experiment and try new techniques, but we're not a pillow family .   They're nice robust looking covers, but I won't be knitting them.

Peplum and Pleat Jacket
I love this, well, most of it.  I don't like the collar, it doesn't sit well unfortunatley and the sleeves are too short.   Love the body shape though and the contrast colours;  I think it's meant to be late 1940's.  I probably won't make it as it doesn't really suit my lifestyle, even after correcting the collar.

Briar Rose Tunic
Ok, I know this isn't really vintage, but I do have a thing for tunics.   This is  a lovely shape and the detailing is nice too.   Admittedly all that reverse stocking stitch would be a pain, but I think it's worth it.  Only thing I'm not sure about is the short sleeves, they're just that wee bit too long to wear over a top and too short to keep you truly warm.  Easily fixed though and not enough to put me off at all.

River Slippers
I rather like the look of handknit slippers and these ones are pretty, I do prefer a slightly higher instep, but I'm sure I can do something to sort that out.   I'll keep these in mind for when my current sheepskin slippers die.

Quixote Scarf
This a wide reversible cable scarf with the cables on the diagonal.  It is quite effective, but I prefer lighter scarves and this one looks like it's at least worsted weight if not Aran.  I think the pattern if made wider would make a magnificent blanket though.

Offset Cable Mittens
I'm not really impressed by these, to me the cuff is too short and also too wide.  It looks incredibly blah.

Fabled Cardigan
Ok, if you're going to photograph a piece could you at least make sure the two sides are blocked to the same length?  Other than that this is a cute and I would imagine quick knit for a little girl.

Tempest Coat
This looks like a great weekend jacket to me, nice and chunky and warm, the only thing I'm not keen on is that in a few places the strands of bright yarn on the front  aren't straight where the button band is joined on. Other than that though it's a nice practical pattern with a bit of interest; would love to try it in various natural wool shadings.

Miranda Tam
A very basic tam pattern with some lovely embroidery.    I think this would fit in with any wardrobe, women wore this shape in many decades last century; I can see it working with 1930's or 1940's wardrobes easily; I really want to make this.

Holiday Lights Tam
Another pretty tam, this one with lace and beads.  I could definitely see me in this.

Lief Slipover
I like the shape of this, but I think it would look better in a more solid yarn.  I'm also not that fond of extremely fat yarn like this and then there's the practical side of things, too many gaps for cold air.

Meriwether Wrap Jacket
Not really overly fond of this, bulky front would be warm certainly, but not exactly flattering. It's a blanket with sleeves.

Hilary Vest
This is particularly unflattering, if you have a waist it just left and if you don't you just gained a spare tyre on the sides.  That waist cord really needs to be able to grab in some of the sides in as well as front and back.

Petite Facile Pullover
This looks easy and warm as well as being cute on a wee one.

Magellan Cardigan
A fairly simple 1970's style wrap cardigan in bulky yarn.  Not really that flattering, but will be warm, comfy and great snuggling by the fire wear.  Just please don't leave the house in it!

Livingstone Cardigan
This is a cabled cardigan with a shawl collar; it's rather cute and quite flattering despite the chunky yarn.  I do think the neckline is a little wide though, I can feel the cold breezes through there despite it being stinking hot right here atm.

Bobble and Eyelet Cowl
A very chunky scarf with bobbled ends for weight so it'll stay put when you wrap it around your neck in a cold wind.   It certainly looks lovely and warm.

Fauna Pullover
The shape of this reminds me of some of the patterns my grandmother had in the 1950's.  Love the collar and the lace on it. This is definitely going into the queue.

Kaleidoscope Jacket
I guess there has to be one of those "what were they thinking" items in every magazine.   For me this is it.  Very low neck at the back, bulky sleeves and buttons under the breasts meaning that everything else gets cold.  I do like the shape on the middle of the back; but I think it would work much better on a cushion cover.

Nantes Hat
I rather like this hat it has a combination of lace and cables.  It's close fitting, so you will get hat hair, but with a lovely hat, who cares?

In conclusion, not a bad wee issue.  Sure there's things I don't like but that's the case for every magazine, but the ones I do like are really nice!  If you don't have it, might be an idea to go take a look and maybe order it; if it's not already available as an e-book it will be eventually and that's cheaper as there's no post.