At this point in my life there is never enough time.   I need time to do work, to do housework (yes, that's another type of work, but unpaid so separate), be with the kids (reading to them is now requested again each night), baking, computer and of course crafting.    Unfortunately I can't fit it all in and of late the kids and crafting have been losing out.

Last weekend we spent more time with the kids, partly because it was George's birthday party and partly because even if it hadn't been I wanted to spend some time doing stuff with them that wasn't housework or garden related.     We went kayaking and it was hard work and fun!   George was a natural, one of his friends was ok and the other took 10 minutes to get the hang of it and then took off.   Ian started in his own kayak and ended up in with me in the double.   I got very wet, Ian got mildly damp and I also got a darned good workout as I was doing all the work, lol!

George was very lucky, he got the Minecraft game from us as well as the time spent kayaking.  He got money from his friends and spent it on more Xbox games (both Lego ones) and he also got a wallet and a little robot from his paternal grandparents.   He's still to get presents from my family and also his paternal aunt.

We have plans for the holidays, aside from the holiday programme I'm taking the boys to learn weaving at the guild and George and I will be warping up the table loom too.    I don't think a lot of housework will get done in the holidays, some because we have to, but not a huge amount.   Gardening will be done because we want to be able to eat home grown if possible; we have potatoes, zucchini, lettuces, peas coming on and there's also beans and tomatoes considering the possibility of future production.
I'm also thinking some baking together would be nice, both boys love gingerbread and there's other yummy options in my books, we can take some baking down to the park and have a picnic.

I've got to do some planning for my next weaving project too, I have the yarn, but need to change some of the plan in Anne Field's book as I want to use all of my mohair yarn in one go if I can.
My test knit is getting there, I'm working on the border now, so it feels like progress is being made.  Photo's will be taken once the border is a bit further along; it's only about 1.5" in so far.

I did finish the neckwarmer though 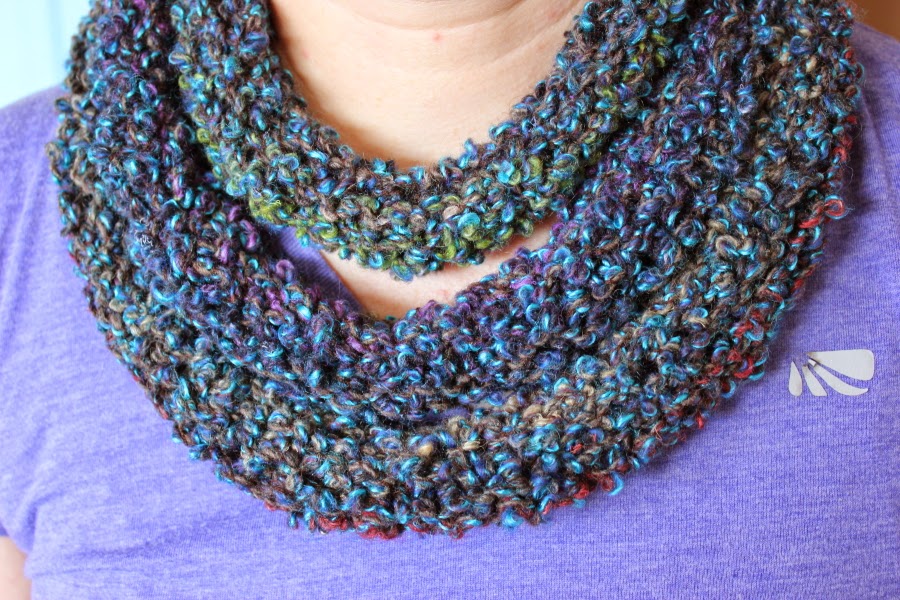 The neckwarmer looks so comfy