Yesterday and today both had things arriving.

Yesterday was some Samoyd fur to spin; known as Cheingora in spinning circles I believe.  This is the dog's clippings for all of his life and was offered free to Anne Field who didn't need it and asked at the guild; funnily enough I put my hand up and she gave me the owner's email address.  He'd put it on Trademe, but said if it didn't sell I could have it; yesterday it arrived due to not selling.  The fur at the top feels a little coarser than I expected, but then again that would be his latest trim; so might well be stronger than the rest.  This weekend I'll go through it to check what the younger fur is like and also to check to make sure there's no moths in there.  If there are then it'll go through the freeze and thaw cycle a few times before I decide what to do with it.  Here's a glimpse of it: 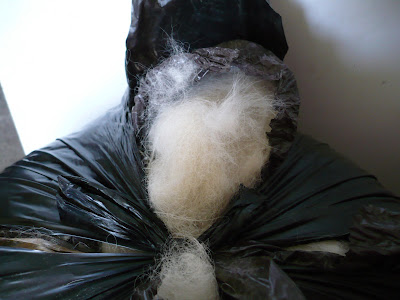 This is a full rubbish bag of fibre so it'll take a wee bit to get through.

Today I found a box outside from Little Bird.  I entered a competition through Good Magazine and won a box full of organic raw food goodies.  There's grawnola, breakfast cereals and macaroons.   Some I probably won't like with nuts in, but the rest of the family will be happy enough with those. 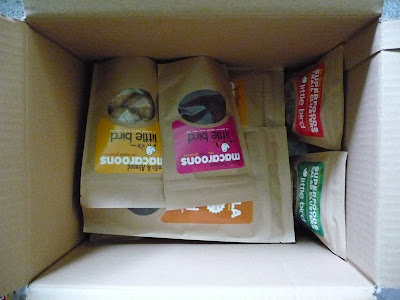 I had one of the cereals for breakfast this morning; picked out most of the almonds (not all) and then added my yoghurt to it; very nice indeed!   It was a buckwheat based cereal with goji berries, seeds and nuts; might have to investigate costings on this one. 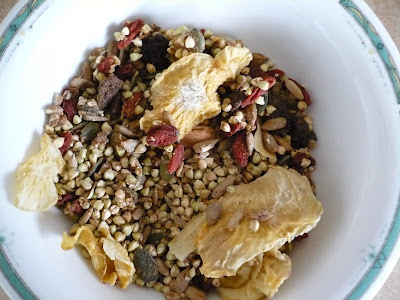 Also today George's birthday present arrived; it was left outside the front door and he was in such a snit this morning when he left that he never even noticed it!   This is a good thing, because it was pretty obvious what it was the way it was wrapped; he's getting a skateboard.

In knitting news, I've almost finished Thomas' first sock of the pair; it's looking really good and I've got about 14 rows to go I think 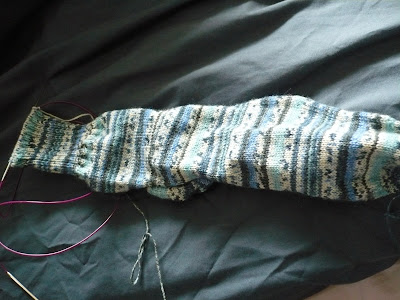 He tried it on last night and really liked it, but wanted it longer (that was about 10 rows back); he'd like knee-high; but there's not enough yarn; so he's getting longer than the last pair, but not that long.
Posted by Rachelle at 3:53 PM