It was a beautiful day too, though I was waiting impatiently for 2 lots of yarn.  I kept checking the mailbox and nothing there, nothing there.
Then, I could see something in there, raced down the drive and there was a wee bag in there; not what I was waiting for, but a lovely surprise all the same.   Joanne had left it in my mailbox to lift my spirits a little, and it worked!    A set of glove blockers she'd found in Nelson last time she was there, made from No.8 wire (as all good kiwi things are), she kept a set for herself; we'll both have to knit and block gloves.  I have a set of mitten blockers on the way too, I'll have a full set of blockers when they arrive!
This weekend I had been going to go to Glentui for the weekend, but with the bottom bug I've had I cancelled, didn't want to risk making anyone else sick; especially as some are elderly.   Turns out we have some people with weak immune systems too so a good decision; though I'll miss going badly.   I think the glove blockers were also to make me feel better about missing that too.

After opening that wee spirit lifter I went back to waiting for my yarn.   First to arrive was Thomas' sock yarn, it came with the Tangled DVD, The Crow DVD and some blank DVD's. 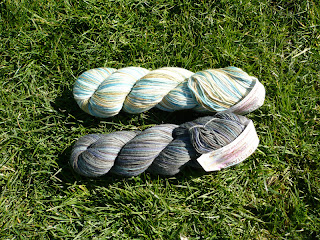 This is going to be a pair of colourwork socks for Thomas, he loves the darker shade which is actually more colourful than I'd expected.  I think it'll be really nice; got a couple of patterns that might work well with it. 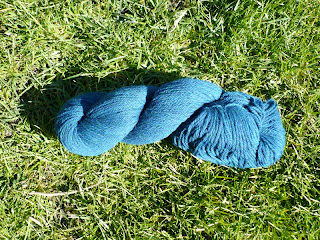 I'm knitting this up in the Jetty pattern.  The yarn has a much greater depth of colour than shows in this picture and should look amazing!


My third parcel was very late; it's the final installation of the Vintage Purls Winter Sock Club 2011 and I think Fastways was trying to see if it would hatch into something if they sat on it long enough.    Love the pattern, love the background yarn, not so keen on the foreground so a friend is buying that off me as she wants to make longer socks.  I'll be using a different yarn with it, still dyed by Morag, but from the previous years sock club. 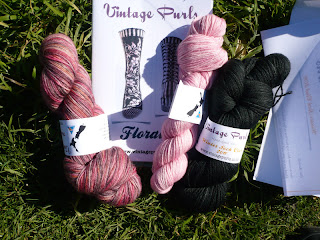 The 2 yarns on the right are the ones that came with the club, and you can see the pattern in the middle.  I'll be using the yarn on the left instead of the pale pink and I think it'll be gorgeous!


There was a surprise yarn as well, it was in with Thomas' yarn and was sent because I reached a certain level of orders with the company.   I got a clear tote bag with the company's details on it a pattern and this skein of yarn 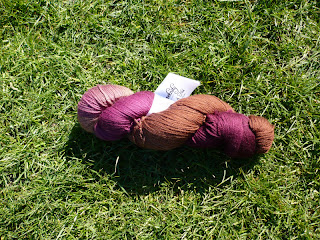 It's rather pretty and I think it'll make nice socks.    That's the last yarn for quite a while though, need to work through some first.

On the knitting front I got the thumb finished on my mitten last night, tried it on and frogged it; restarted with 2 more stitches and now it feels right.   Not quite finished yet though, and of course now that Jetty's yarn has arrived it's gone on hold!  Will cast on Jetty tomorrow and start frantic knitting, 10 days after everyone else.
Posted by Rachelle at 7:45 PM