This post is a bit of a mix, it's been a busy few weeks what with snow, sewing, knitting and family.   Also Thomas and I both got hit with a nasty bottom bug, just coming right now and we've also picked up the cold Ian brought home; not fun.

I did manage to get a few things done, George's pyjamas are now finished and he loves them! 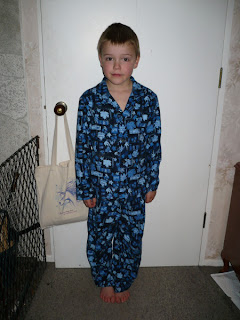 I can now show you the socks I finished for a friend's baby in my Lace Chain Baby Socks pattern. 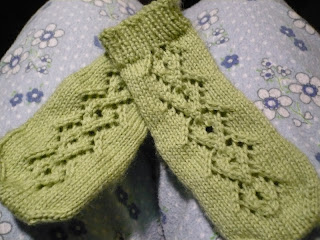 After I'd given the socks to Sonya, they got passed around along with all the other gifts and were much admired; I got a slightly swelled head for a few moments there!


2 days later we got hit with snow again, a lot of snow!   We had more shovelling to do than last time, but we got onto it earlier to avoid the icing problem.  In the end we probably didn't need to bother, it got rained away 2 days later; however it was deeper and fluffier than last time.   A couple of photo's I took turned out quite well, my helpers for shovelling the path and drive: 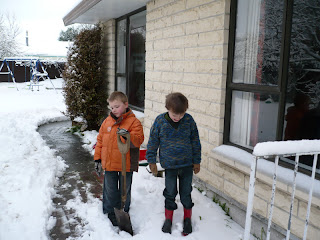 Both had fun helping, I had to go and get the old shovel as both my spades got appropriated.  I took a few more photo's, but the one I like best was this one: 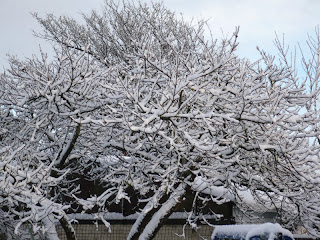 this is our nicely iced peach trees; aren't they beautiful?   Was kind of glad that we had the fire though (don't tell Thomas), I would still like a heat pump as well, but T doesn't want one for some reason.

Tonight I finished the sleeves on my Central Park Hoodie, they're looking really good.  I'm not starting the next bit yet, waiting on the yarn to do the final Camp Loopy project; this is feeling a bit like deja-vu.  Yarn I ordered a week later arrived today, hoping it'll arrive on Monday now that I've finished these sleeves. 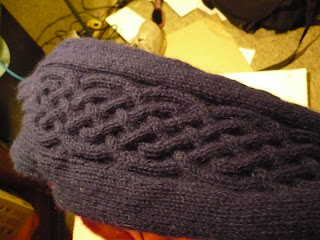 Isn't it gorgeous?     Got further on my sock too, now past the heel turn and about to pick up stitches for the gusset.  Might get a bit further with those tonight.  Almost up to the colourwork part of my mittens as well and feeling the need to cast on something new.   Need that yarn to arrive!   Ian needs mittens too, but I need to get mine finished first.

I think my cats have the right idea, no knitting, not worrying about when yarn will arrive; this is where I normally find them: 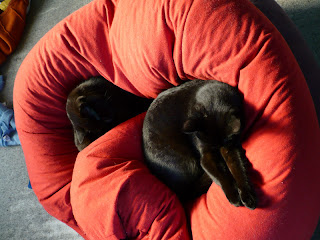 I think that's Star on the front and Ray at the back.   Ray was the original beanbag cat, now both are.  I usually find both of them on our bed in the morning and here in the afternoon.   At night they often sleep with us, but if they go outside they stay there unless I hear them; fed up with the black and white tom coming in, eating their food and occasionally fragrancing the house.  If I could catch him I'd make him regret it, but I can't so I've taken precautions; cat door is now out only.
Posted by Rachelle at 9:28 PM

Anne (I should be sleeping) said...

Wow, lovely stuff! The baby socks are divine, and George's pj's look very warm (and 'cool' at the same time ;) ).

@Anne (I should be sleeping)


Thank-you. George loves his pj's. I'm going to have to knit more of the socks too, need a few for unexpected baby gifts in future I think.