We had a bit of fireworks on Saturday night for Guyfawkes, the boys loved it!  We've still got half of the box to go,which we'll do next Saturday. 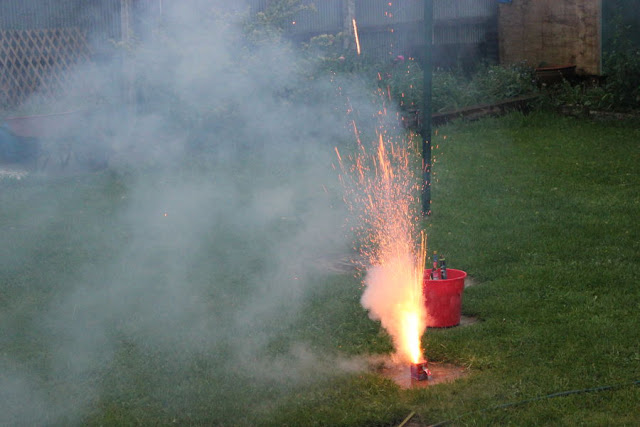 This week I've been concentrating on George's quilt, I'm about 1/3 of the way through the free motion quilting of the main part of the quilt, hoping to get the other 2/3 done by Tuesday, then another couple of days until I get the border done as well.

The story I'm telling with the quilting is the dragon in a cave by the seaside, hence the pebbly rock in front of the cave, the swirls of the sand after the tide has gone out, the waves as it comes back in and the gentle waves further out on the sea.   The charcoal squares have either branches or roots to suggest the vegetation around the area.   My quilting definitely isn't as good as I'd like, but considering this is the first time I've done FMQ on a full sized quilt I'm pretty happy.

I've also been working on the mystery shawl and so far it's just stocking stitch, but I do have beads for it now.  The beads have changed simply because the green of the previous lot was too blue based and the bronze I couldn't get more of, so here we have the new one I've chosen:
I also had some yarn arrive today, it's taken a while and now the project I bought it for has been cast on in a different yarn, but here's Trail Socks by Handmaiden Yarns in the Raven colourway.

I LOVE the quilting you're doing around those dragons! Awesome

Thanks, I'm feeling pretty good about it too, it just needs the binding now.