The weekend and other things1

First up, happy Blogtoberfest!  I'm going to try and post every day from now on this month, had to miss the first couple of days due to not being here.   Out at Raincliff there is no TV, internet or cellphone coverage so I had good reason not to be posting.  We had 20 plus people, I didn't actually count the numbers, but it was a congenial and inspiring group of ladies.   I came back with more stuff than I arrived with, which is normal for these types of things.  I got patterns, buttons and trims for a very good price.  Summer had arrived with a bunch of boxes of stuff from a shop that had closed down locally.  10c per button $1 per sewing pattern, 50c per metre of trim and 50c per knitting pattern.  Not a great deal left, but some stuff I'll definitely use.
I also created 4 fabric covered buttons courtesy of Leanne and her button press; I used some owl fabric I had and they're gorgeous!   Photos' not taken yet; I got some water on the camera so I'm giving it some time before I try turning it on.
I've taken a few photo's, but the first is a collage of the set-up and also my pile of projects which of course didn't all get done. 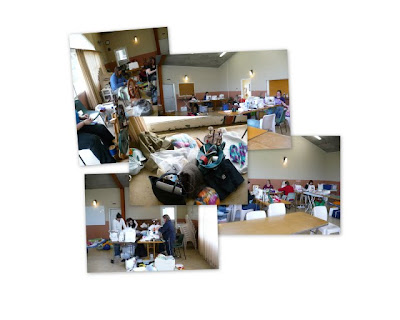 I taught Tanya and Louise to spin.  Tanya had tried a couple of times before, so she was spinning very even yarn very quickly.  Louise I don't think had, but she still did really well (I mean it Louise, that was darned good yarn!).  Louise has agreed to me posting a photo of her showing off her first skein of yarn. 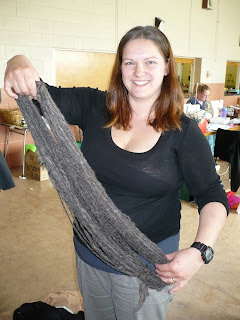 How cool is that?  It's Romney that's been washed and carded, I have a jersey made from this fibre and it's lovely and warm.   I think I can safely say both ladies are hooked, they stopped in at Tallyho carding on the way home and rung them to open the shop so they could buy some wheels of fibre!  Louise has a fleece at home that she wants to wash and spin from scratch, so she also tried flick carding some Corriedale I'd taken along for that purpose.  She wants to do it from start to finish, that is from doing the shearing herself right through to knitting the jersey at the end, she's going to have great fun doing that.  Her wee son was very cooperative and let his Mummy have lots of time to practice too; neither of my boys were that accommodating at that age.
I also got some spinning done, my first ever silk hankies which I dyed a while ago and have had hanging around the craft room catching on my hands whenever I touched them.  This si what they look like now; very happy with them. 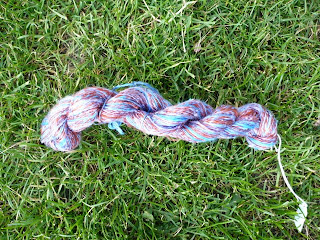 And some Gotland lamb, still have a lot of this to go, but I wanted to get some plied to see how it looked and I'm really happy, it's lovely and squishy; probably won't wear that well, but it'll be warm! 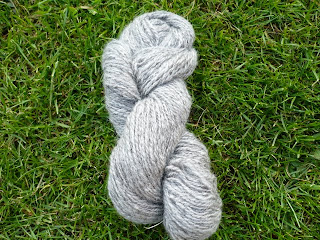 I just love grey!  This will eventually end up as a jersey for me and will probably need regular shaving to keep it presentable.  It's been spun woollen.   Neither has been washed yet, I was going to do that today, but the boys had long showers this morning and there's no hot water left at all.

There was some wonderful stuff being done by other people there too while I was spinning and knitting; the most wonderful quilt top emerged really quickly from a jelly roll 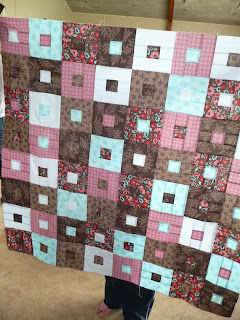 I believe it was being bound in red to pick up the colour in one of the squares; not sure on the backing.  Definitely rather impressive with how fast and accurate it was though.  Reminded me I should get around to selling the quilt kit I've got for a barnyard; the boys have outgrown it now, however it cost me $30 per month for 12 months so not sure how easy it will be to sell it.

On the way home we dropped into the Geraldine and got Mum her seedless blackberry jam, me some more caramel icecream sauce from Barkers shop and some lovely looking Feta cheese from the cheese shop there.  I also got the most divine black doris plum icecream in a cone which I devoured very quickly.  After that we hit the Tin Shed which stocks  a lot of Merino and Merino/Possum knitwear as well as some yarn; I may have accidentally bought this: 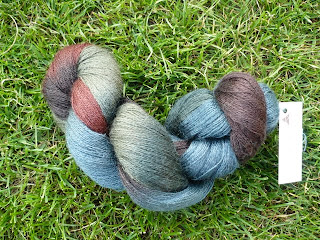 It's laceweight Mohair/Merino so a lovely sheen and since I got 2 I can make a large shawl with it.   It's made by Touch Yarns, not my normal choice in colour, but so deep and moody I had to get it.

Another stop in Tinwald at Annies quilt shop nabbed me a pair of embroidery scissors in pink and cream, some inch printed embellishment tape which I'll probably put on the bottom of a skirt and 2 lots of very fine trim in pink and burgandy.  I need more skirts.
We then dropped into Ashfords where I got 200g of blue silk/merino to spin up and a pattern book for children's hoodies which covered sizes 8 to 14.  I love spinning silk and Merino so I'm looking forward to that.

Today we went into work where I showed off my yarn that I'd spun, picked up some work that I'll be doing tonight and then came home.  The boys have played in the garden a bit with their fruit iceblocks 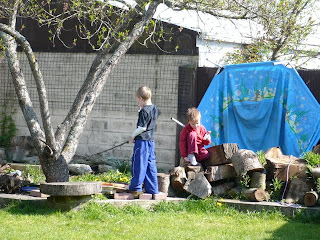 and also inside with their playdough 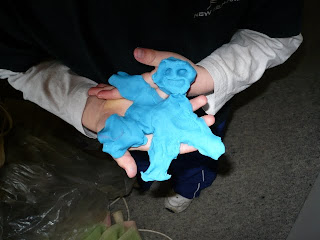 apparently this is me, a pretty good likeness I think.   Everyone is tired now, so we've watched a movie and they're now playing Lego Batman while I work.
Back tomorrow, have a great day everyone!
Posted by Rachelle at 3:40 PM