Busy day today, Ian's off school on Fridays which means I have to work around him a bit.
Went into work first so I'll have enough to keep me going for the weekend, though I can't store it in the boot of the car as Thomas will be taking the car for the weekend and putting all his gaming stuff in the boot.  Not sure where I'll be putting the finished work, but I'll sort something out.
After we got back from work there was the usual chores including cleaning out our one remaining guinea pig who's doing fine, and ringing the SPCA to see if they have kittens yet.  I'll be doing that every week till we get our kittens.  Unfortunately none yet, but when they start there'll be tonnes of them apparently.

I had some painting to do for Thomas for his gaming figures, got that done and then Ian and I could do some baking.  We made 2 things, some banana muffins (using my banana cake recipe), 2 duck eggs went into this and some Saucy Sues (I've eaten rather more of these than I should).  I ran out of time for doing more stuff as it was lunchtime by the time the SS's were cooked.  Ian then got to spend some time on the computer which he's really enjoying, now that George is home he's agitating for his turn.
In the meantime I've given him one of these 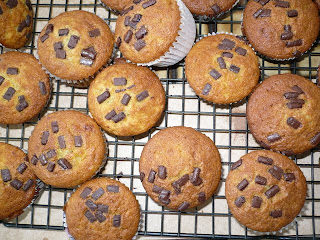 Which can't have been too bad cos it's all gone now!
I'm thinking I might get some knitting done now, no sewing today, but maybe tomorrow.
If it's fine maybe some gardening with help from the wee ones, they won't be keen but they need some outdoor time or else they'll get all pale and attentuated from lack of light; hang on, that's plants not kids.  I'm not taking any chances though!
Posted by Rachelle at 3:24 PM