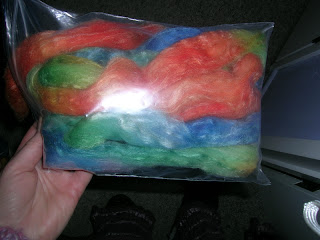 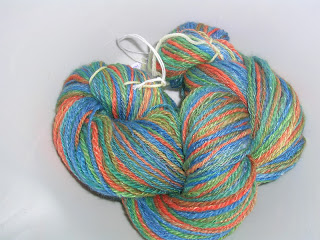 This was my first yarn in the Tour de Fleece 2010.  It's 187.5m, 45g and approximately sport weight.  I've called it Tulips and Lobelia.  It's going to Germany as the handmade component of my yarn swap.  Although I'd love to keep it the colours fit in really well with my swappees colours of green, blue and autumn shades. 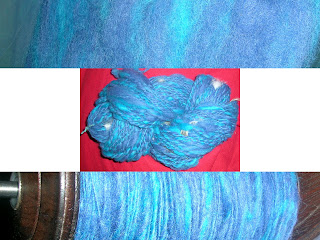 This was my second one, it's called Blue Barf.   It's an art yarn of alpaca (the prep was horrible), it became art yarn as the other option was to throw it out.   Love the colours, hated spinning it but it's all done now, 75.5m of super bulky yarn with feathers and down in it.  I'm thinking a hat trim for this one; will be nice and warm at least. 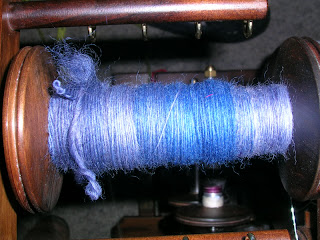 Knitting, hmm well that's been sort of on hold a bit while the Tour de Fleece is on, but I've finished the ribbing band on my One Sided and started the main body and I've also determined which shawl I'm doing next.  Thanks to the generosity of a lovely Raveller I now own the Evenstar shawl pattern; I've just got to determine if I'm using a cone of Cashmere or a cone of Merino to knit it up with.  The cashmere is the recommended weight, the Merino is slightly lighter so would come out smaller.  Either would be beautiful.   Also have to cast on a smaller shawlette in some Purewool for a SIL.

It's school holidays now too, yesterday was a rest day, the boys got to watch Disney channel most of the day while I worked, today will probably be similar except we will be doing some baking and also some reading of the homework list from school.  Ian's full of cold so I don't really want to go out today if I can avoid it.
Tomorrow is the first activity.  George will be going into the guild at 1pm and learning to spin and knit there; I'll take Ian out for a wander around town and the Art Centre while he's there.  Afterwards I'm planning on going to Southern Encounter so the boys can look at the fish there.  They've got a holiday deal where you pay for an adult and 2 children get in free which makes it affordable.
We're also planning on going to the Antarctic Centre at some point which is currently half price for residents and Liz (MIL) is taking them for a night or two next week (I'm hoping for 2).  She'll probably take them to the movies, I can't do that as I usually need to go to the loo halfway through and I couldn't leave Ian without supervision even for that short time in a public place.  I'd probably come out to find he'd gone out the emergency exit and disappeared!
Posted by Rachelle at 9:49 AM