and luckily she did, leaving a few momento's behind though. 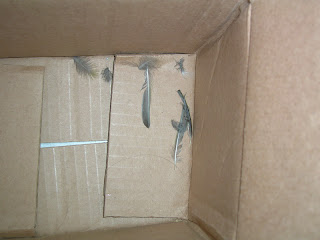 The little birdie in question was our kitten's 2nd catch of the day (1st day of successful hunting).   The first one she brought in yesterday morning wasn't moving so I chucked kitten and prey outside.  I'm pretty sure that was a sparrow so no huge loss.   Last night however she got a silvereye which she hadn't killed.  He was pretty shocky though after I'd removed him and couldn't hold onto a branch outside so I popped him in the above box with some facecloths to keep him warm, closed the box and put it in the hot water cupboard for the night with a towel on top so he couldn't get loose.  No food or water as I didn't want him choking or drowning and I just prayed he'd be ok this morning.   First thing I did this morning while still in my pj's was to check the box and he was just fine!   I kept it shut until we got outside, opened it up and off he flew up to the silk tree.  Unfortunately I didn't get any photo's of him, last night he was shocky so flashes would have made things worse and this morning there was no way he was hanging around for photography!   He left a few feathers behind as a momento though as you can see.

Before all this happened though I got some spinning done while watching Riddick on DVD with Thomas; the boys are away at Grandma's for last night and tonight so we've got some free time.   Thomas was off sick yesterday, but is back at work today.  He did quite a bit of work from home and then we spent the afternoon playing Halo 3 together.  It was very nice.
Here's the spinning I got done.  The fibre is pin drafted roving from Fiber Optics on Etsy and I'm spinning it for socks, so it's been split into 3 roughly equal parts.   I worked on that while I was waiting for a response from an email I sent to Margaret Stove to check how long my skeins should be for the course.  Now I know, 25m so I'll be working on that tonight. 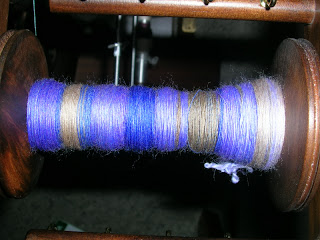 Today, I'm going to get some work done on the pj's that have been sitting around for ages, but I think I might light  the fire first as I'm feeling a little chilled and my fingers are fighting me even to type!
I'm also going to do some stash diving and pull out a skein of something yummy to give away as well as some fibre to send off for a scrappy fibre swap.
Posted by Rachelle at 10:06 AM