Theodora, how I love thee! 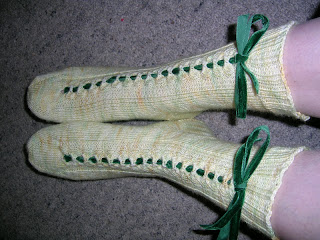 Can you see why?  They fit really well, they feel nice and the ribbon is just gorgeous!  Even Thomas commented they were really nice without me having to prompt him at all.  Need to cast on the sock club one next, but I'm feeling really tired atm after several broken nights (Ian's the culprit here).   Keep getting woken up by someone giggling and talking to themselves.  Should also do some work on Central Park Hoodie, might see how I go.
Will do some work as well, have to drop it all off on Monday so needs to be done.

Had a good day at the guild today.  Several people popped in for the first time, all knitters and they all had a good session I think.  Hoping they'll all be back; one of them was learning Fair Isle and doing a darned good job of it!  He thinks he might have the Tudor Roses book at home by Alice Starmore which if he does he'll bring in for me to take a look at.  I don't think he wants to sell it, but it'll be nice to see the legend none the less.  He's got some idea of how much they're selling for too so it's even less likely he'd sell it to me considering I can't afford those prices!  I have to say though for his first time doing FI he made it look easy, definitely going to try it soon.  Need more time though, there's the knitting I've already started, the FI I want to do, housework, work, children and I also need to strip wallpaper and paint the laundry, kitchen and dining rooms.
Actually, I could cope with winning Lotto instead, then I could pay someone to do the housework, redecorating and I wouldn't have to work; how nice would that be?
Posted by Rachelle at 4:47 PM