Yet another applicance dies

You'd think we'd had enough bad luck with the appliances that have already died, plus more importantly our poor wee kitty cat (still missing her), but no.  Yesterday morning while getting the dishes ready to go the waste disposer went put put sigh.  It then refused to do anything and water took ages to drain out.   After a wee discussion with DH we decided we needed a replacement as we use it quite a bit despite it being not that eco-friendly.
Went online and was a little surprised at how expensive they were.  Most of the ones in the Consumer tests didn't seem to exist anymore.  Insinkerator which was our dead one were over $300 for the cheapest one and that was only galvanised on the inside; I wanted one that would last which meant stainless steel.  I wasn't prepared to spend $500 to get it though.  Ended up on Kitchen Things website, since they did come to the party with the washing machine in the end I decided I'd still buy from them.  They had Smeg ones for $299 for 1/2 horsepower which did everything I needed.  When I got in there the price was actually $249, however they were out of them.  They offered the 3/4 horsepower version for $280, normally $369 on the website so I got it.

I found myself wondering this morning what people normally do with left-over milk and cornflakes when they don't have one.  I determined that it would be replaced tonight after DH got home.  After dinner I did replace it, with minimal help from DH and also cleaned out the overflow for the drain board which was disgusting!  It's now all clean.  Only downside is it fits in slightly differently from the old one so the pipes had to be skewed slightly which made it harder to get that overflow in place, and now the shelf in the middle doesn't fit so I'll have to trim that tomorrow.  Unfortunately the bit that has to be trimmed isn't the bit with water damage from the previously mentioned overflow pipe. 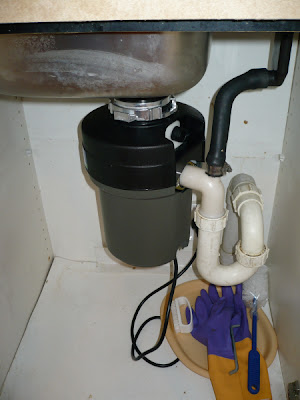