What a Lovely Day!

Computer is mostly fixed now, just got to work out some sound issues so DH can watch his YouTube stuff.
Early wake up this morning to get ready for the bus trip.  Took 2 knitting projects with me and got quite a bit done on my Whisper, I had under an inch done, now this is what it looks like: 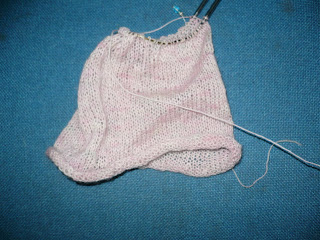 I'll have to check my gauge soon, it's probably long enough to get some idea.
I also got to the gusset increases on my second Spiral Bound sock, that was about 15 rows. 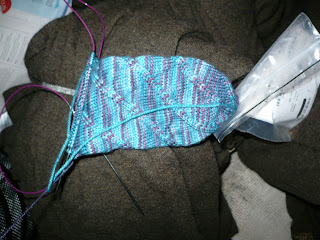 Still a way to go on both projects, but I've got next weekend to work on them along with spinning and another knitting project.  I did all the above knitting on the bus on the way to and from Cave, inland of Pleasant Point in Canterbury.  A lovely trip with a great bunch of ladies.  My only gripe would be that the seats on the bus were not designed for healthy weight New Zealanders.  Joanne and I were a little squished in our seat, but we still managed to knit anyway.

We arrived at White Rock farm just before lunch, got shown 3 lambs which hadn't managed to feed off their mum yet.  One set of twins that had problems with their mums teats as they didn't stick out the right direction and one that was a little weaker who's mum I believe had lost some teats so could only feed one of her babies.  This one would most likely be hand reared; very labour intensive.
After we'd looked at the lambs it was time for us to go and look at fleeces; I had not originally planned to buy any, but in the end I had to.  Luckily I didn't have a lot of money with me so I only got 3; 2 of which I got half shares in.
I got a black first, which I got all for myself; yummy! 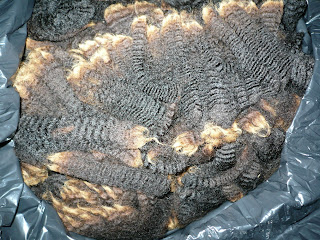 2nd one I shared with Joanne, she spotted it first so it was really nice that she was happy to share.  It's a latte coloured fleece and is beautiful! 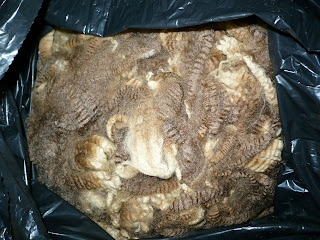 The 3rd one I shared with Jan who only wanted half and as I have a thing for grey it seemed meant to be.  It's a lighter, bouncier fleece and should be beautiful. 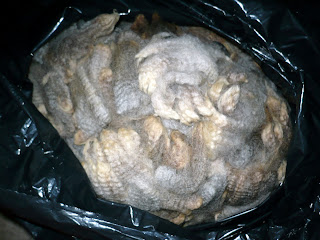 All of the fleeces are Perendale, I think the top one may have a wee bit of Romney in the breeding.   Luckily I like Romney as well.  So all of them are in the laundry until I can get a chance to wash them.  I wish I'd taken the camera with me, but I completely forgot it.  We got to see some lovely sheep with their lambs and the farm dogs were very well trained.
On the way back we stopped off at Geraldine and got to go shopping, I got some lanolin based handcream, some caramel icecream topping and some plum sauce.   I'm back there next Sunday so might get some cheese on the way back too.
This is a good way to start the school holidays in my opinion.  The boys had a good day with time on the Wii, though George has lost that privilege for tomorrow after doing something his father had just told him on no account was he to do.
Tomorrow we've got our workout, then might go to Willowbank in the afternoon to get our family pass.
Monday I have to drop into work, then I think we'll start tidying the house and maybe do some baking.  Tuesday I'm not sure yet, Wednesday we have a picnic lunch at a friends place, Thursday not sure and Friday will be Gym for the boys and then I'm going to Raincliff for the weekend while DH looks after the boys at home.
Posted by Rachelle at 7:48 PM

Just as well I can't reach through the computer screen or you would have lost that top fleece! (actually all of them!) :-) Sounds like you had a wonderful day plus a great week planned. Enjoy!