A wonderful weekend gets a slight custardy ending

On Friday evening Joanne picked me up for our weekend at GlenTui.  It's an annual spinners and knitters getaway that I went to for the first time last year and Joanne went for the first time this year.  It's a wonderful experience aside from the showers which take ages to warm up.  However the company more than makes up for that.
Over the weekend I got 7 bobbins filled, 2 and a bit plied off as well as 2" on my second bug sock.   I also did my first ever felting, now I just have to turn it into moccasins; I have the sheepskin bottoms so it's just a matter of designing a pattern and then sewing the felt shape onto the base.   Felting is hard work!  The food was really nice and this year I remembered to take my own hot chocolate.
As with last year I took way too much fibre, and I came back with more than I arrived with as Shona Schofield was there with a large amount of deliciousness.  I'll take photo's of that later, but there's 2 100g bags of dyed fibre in rich shades, 1 of a light periwinkle, that's rather more than 100g and 1kg of the most divine combed Merino top in grey!!!  One of the ladies in my room (Heather) had some she was spinning up and it was just to die for.
Here's some of the yarn I made 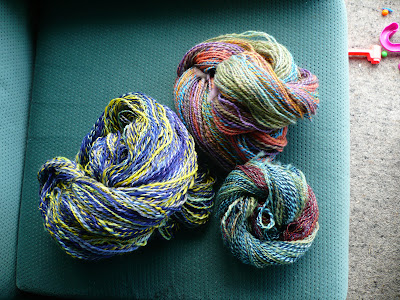 On the left is some Vintage Purls fibre called Merry-go-round, which I've renamed Dutch Iris (415.5m of worsted weight).  The right top is my scrappy yarn from the NZ scrap fibre swap (205.5m of worsted), and the bottom is the remainder of the scraps plus what was left on my bobbins from other projects (166.5m of various weights).   The top scrappy is going to be the contrast on my Catamount cardigan which should be started on Thursday; all other knitting will go on hold.
This time next year I'll have more to show as I'm booked in again; if I'm really lucky I'll be there for one extra day though as it's starting on Thursday.  Hopefully DH can take a day off.

The custard - turns out George turned into a troll the moment I left and had to be taught a lesson about who's in charge.   George has now realised it's his father, not George!   Further custard was added when the dishwasher stopped working and started making strange noises.  The repair man came out today and took it away; the water heater has died so we are without it for 2 weeks minimum and will be out of pocked by $654.50.   Thomas asked how much a new one would be, at $1700 for a decent one we decided that repairing was the best way to go.  Would have cost us $217.00 to have not repaired it anyway to pay for the work they'd already done in finding the fault.  All I can say is this had better be the last appliance to die!
In the last couple of months we've had the washing machine, DVD player (luckily covered under extended warranty, but still took a month for the part to arrive), the TV and DVD player in the bedroom got totalled by Ian and now the dishwasher.  Oh, and Ian's scooter broke; not his fault.   I got him a new one yesterday using my spending money and also a new popcorn maker.  I'm feeling a little less financial atm.

On the plus side, we've just arranged to increase our mortgage repayments so we'll be able to start saving for our retirement properly in 3 years.   It's going to be a tough 3 years though.  No spending for me except for my normal spending money, have to save as much of that as I can for the various crafty things I have coming up.

Upcoming crafty things.  I have a traders day to go to on 17th September, luckily I have 2 pays before then.  Then 1st weekend of October I'm heading to Raincliff for a crafty weekend with some online and real life friends; oh and between them is a bus trip with the spinning guild to a farm.  Should be a good month or so if I save hard!
Posted by Rachelle at 6:58 PM

Anne (I should be sleeping) said...

Those yarns look lovely! I'm in awe of your ability to take fleece, spin it, knit it, and now felt it - well done!