The first bug sock is finished, and I've found my sock blockers!   That's the good bug and here's a couple of photo's 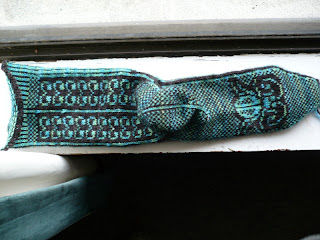 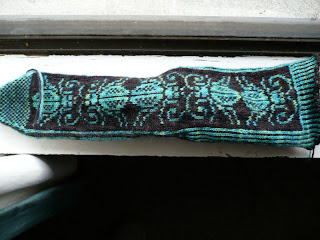 As you can probably tell, they're not blocked yet.  I don't want to block until both socks are finished, the second one is cast on and I'm doing the toe increases atm.   The finished one is a tad tightish across the top of the ankle area, but it's my first colourwork so I'm happy overall.  If my second one is right then at least it taught me something.  Once these are finished I'll be adapting the pattern to mittens, I should have enough of the yarn left over with luck and if not for the background yarn I do have some other brown yarn that will work just fine.

Bad bugs:  Ian has yet another bug, he's been off school today, let him play on the computer as he's just not feeling well.  He's got a bit of a temperature, coughing and has been suffering from a gassy tummy with some pain as well.  Doctor has checked him out and reckons it's viral, I have a antibiotic prescription for just in case, if he's not improving by Thursday then it's likely gone bacterial so I fill it then.  I'm not expecting to have to do that though.  In the meantime I'm busy working to try and get the stuff my boss gave me on Friday finished.
One good thing happened today though, I had won a hank of Madelinetosh sock yarn in Scarlet last week on a NY blog PhotoKnitDog.  It arrived really quickly, was in the mailbox today which made me feel a little better.   I also won a download of the latest Knitcircus; as I'd already bought it I gave it to Joanne.   Some lovely stuff in this one, which is why of course I bought it!   I can't give you a photo of the second win, but here's the first, it's beautiful! 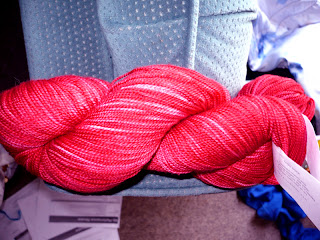 My latest purchase was from Vintage Purls, some laceweight in the limited edition colourway Mother of Pearl 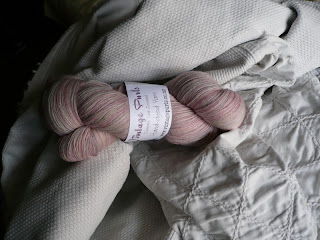 This is going to be a Whisper Cardigan, will have to cast that on soon if it's to be ready for summer, it struck me as a wonderful colour for a summer cardi.  Will wind it into a cake the first day Ian's back at school.  In the meantime I'll keep working on work as well as my bug socks, my Spiral Bound socks, my Central Park Hoodie and my One Sided.  Long way to go on the last 2, but the Spiral Bound has turned its first heel so is back to being my carry along project.

Won't be able to do a lot of knitting on Saturday, going to Ashburton for our nephews birthday party.  Assuming that Ian's well enough of course.  Not much on Thursday either, Ian had better be back at school then as George has his appointment at Mental Health to be assessed for Aspergers.  If Ian's still sick then Thomas will have to take the afternoon off work to look after him.
Posted by Rachelle at 2:58 PM

I absolutely love those bug socks! Can't wait to see how they look as mittens. :)

Sorry to hear about your bad bug problems but your good bugs are really cool! Love them!