Today was Woolfeast, the first large trading day with traders from all over NZ and a heck of a lot of knitters and spinners etc.  I popped in first thing this morning and there were tonnes of people already (it opened at 10am).  I went in with cash and came out with yarn and other things, no cash left and I might have used the card for a couple of items as well, which I now have to pay for from my spending money.   It was worth it though, we've never had one before, but I suspect it may become an annual thing; I certainly hope so.

I got to meet new people, some of whom I knew from Ravelry including Doe Arnott, one other parent from the boys primary school (that was cool), some I don't know at all, but it was easy to talk to everyone despite my normal reticence.  Also saw a lot of people I knew from guild.

And here's the haul: 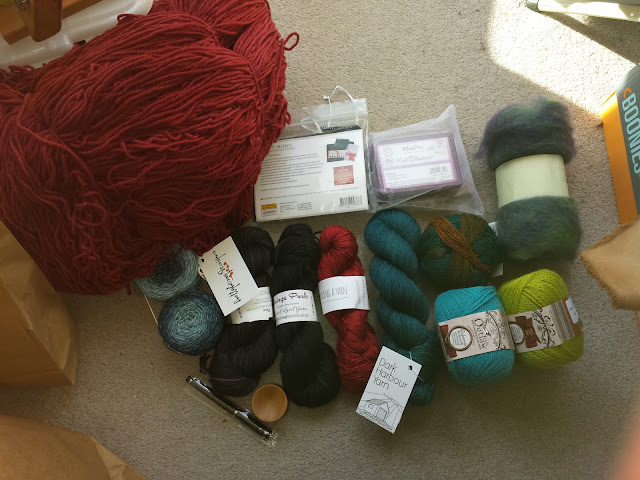 Next two pays my spending money will be going to pay for the final bits from this, I won't need much else though, just some silicon dots and a double boat shuttle.  Will be either taking lunches to guild or coming home early to eat.
Posted by Rachelle at 12:36 PM